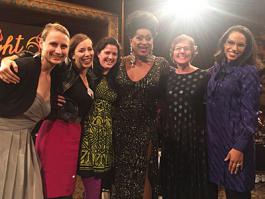 PORTLAND, ORE —The Right Brain Initiative was honored on Tuesday night by the Portland Monthly magazine’s prestigious Light a Fire awards, an annual recognition for some of the best non-profits in the city. Right Brain received the Game-Changing Project award, which celebrates a unique collaboration that drives community transformation.

Designed by a cross-section of Portlanders in 2008, and led by the Regional Arts & Culture Council (RACC), The Right Brain Initiative is the first arts education program of its kind in the state of Oregon. Now a national leader in the field, The Right Brain Initiative received major attention in 2014 after releasing promising data that connects its arts programming to an above-average increase in student reading and math scores. English Language Learners experienced the most dramatic test score increases after their schools partnered with Right Brain.

“In 2007, a small group of dreamers engaged the community to find out what kind of arts education initiative would meet local needs,” said Marna Stalcup, Director of Arts Education at RACC. “I am now so proud that we can say we have built an effective and growing solution. Receiving recognition for that work is just icing on the cake.”

The Right Brain Initiative was created with a vision of transforming learning for children, by carving out a permanent home for creativity in every K-8 school. Right Brain focuses on helping teachers turn their classrooms into places of discovery and innovation by integrating the arts with other subjects. Through workshops and collaborations with professional teaching artists, teachers learn to fully fuse visual art, music and other creative disciplines with other classroom subjects like math, science and reading.

Right Brain launched its programming in 2008, working with 20 partner schools in four districts.

A true public-private community partnership, Young Audiences of Oregon & SW Washington has served as the Initiative’s Implementation Partner from the onset, providing RACC with day-to-day program support and services. Initial—and enduring—public support came from the City of Portland, and Multnomah and Clackamas Counties. Among the first corporate partners were Bank of America, Portland General Electric, and The Standard. The Collins Foundation and the James F. and Marion L. Miller Foundation were leading multi-year foundation investors. Oversight committees made up of education, business and arts leaders continue to work with staff to lead the direction of the program.

Since its inception, Right Brain has more than tripled in size, building partnerships with 63 schools in seven school districts. In the 2015-16 school year, the program serves an estimated 25,000 children and their 1,300 teachers. Right Brain supports many of the students who need arts programming the most: 55% of students at Right Brain partner schools are eligible for the free-and-reduced lunch program, and 24% identify as English language learners.