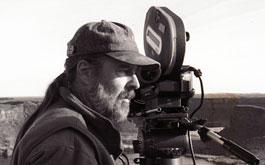 The Regional Arts & Culture Council (RACC) is pleased to announce its 2012 Fellow in Media Arts: Lawrence Johnson. This fellowship honor carries a cash award of $20,000.

“Larry has spent many years developing his techniques; experimenting; and is eager to share his personal vision and stories,” said Eloise Damrosch, executive director of RACC. “We are thrilled to award him this Media Arts Fellowship – something only the highest caliber artists in our community can receive.”

Larry Johnson has been making films since his childhood and has developed a national reputation for historical and cultural documentary and films for museums across the country. Many of his films have been seen on Public Broadcasting stations nationwide. He has created films for museums such as the Smithsonian Institution, the Washington State History Museum and the National Cowgirl Museum and Hall of Fame. Johnson has taught cinematography at the Portland Art Museum’s Northwest Film Center and has completed several residencies through its Filmmaker-In-Schools program. Johnson has been a recipient of three project grants from RACC and the 2008 Oregon Media Arts Fellowship. His most recent film, Stuff, is his first personal documentary. This highly acclaimed film has received awards in multiple film festivals across the country including awards at the Florida Film Festival (Special Jury Award), Talking Pictures Festival (Best Documentary) and the Astoria International Film Festival (Best Documentary).

After taking an opportunity for some much needed “creative retreat”, the Fellowship award will allow Larry to start work on a second personal documentary. With Ghost Money (working title) Larry plans to tell the story of his tour of duty as a soldier-cum-entertainer in Vietnam. This proposed film will be framed as three interlocking stories told in parallel. He will use archival footage (shot from his tour in 1972), animation reminiscent of Asian comic books, and new footage of modern-day Vietnam (trip funded by the Fellowship).

The RACC Artists Fellowship Award, established in 1999, is one of the largest and most prestigious grants to individual artists in the Pacific Northwest, supporting exceptional artists who enrich the communities in our region. One fellowship is awarded each year, rotating through four artistic disciplines. Next year, a literary artist will be honored. For more information, visit www.racc.org/grants/individual-artist-fellowships.

To be eligible for consideration, professional artists must have worked in their field for 10 years and have lived in the Portland tri-county area for five years. Applications, which include three narrative questions, artist resumes, two letters of recommendation, and examples of the artist’s work, are reviewed through a panel process of community representatives from the discipline being honored.