With the new collection of public art at Multnomah County’s stunning new downtown courthouse, artists show their deep roots to community, identity, and history. New art surrounds the building’s exterior, including lively vignettes depicting local landmarks made from cut steel panels and temporary murals made by youth and local artists. Inside, artwork enhances the building’s dramatic city views. Clusters of works in various styles and media are on display in the service areas and hallways. A massive 25 by 75-foot mural made of kiln-formed glass glows in the main lobby at 1200 SW First Ave. in Portland. 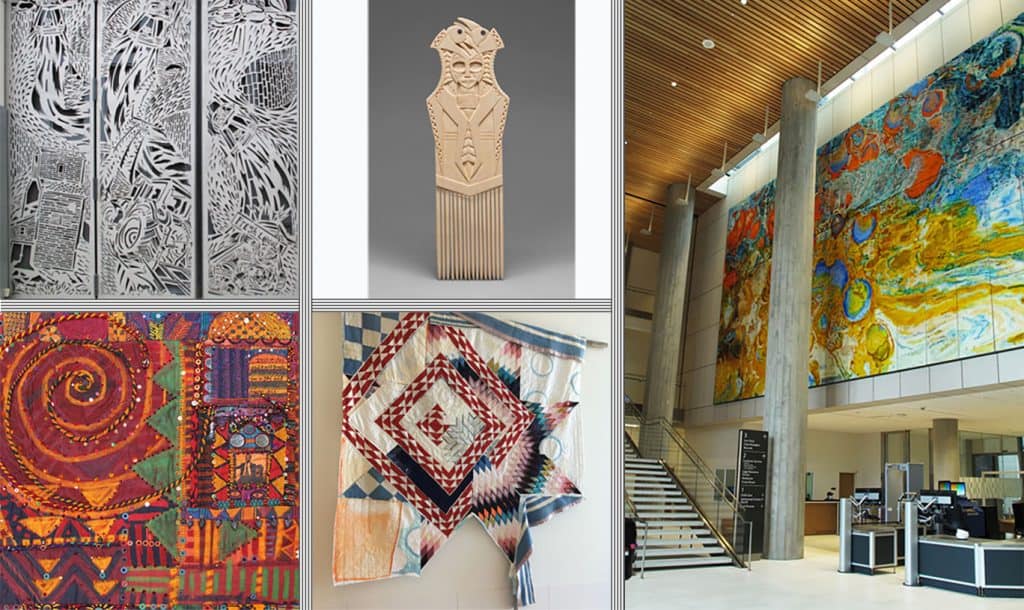 Our Public Art Program commissioned or purchased 47 individual pieces from 20 individual artists (complete list below) for the courthouse. The selection panel identified four themes for the courthouse artwork: “community,” “land & water,” “traditional,” and “contemporary crafts.” By intentionally selecting artists with a range of ages, genders, backgrounds, and identities, the new collection reflects the diverse communities living and working in and around Oregon. Artists offer visual connections from the courthouse to the immediately surrounding city environment and many identifiable landmarks throughout Multnomah County and well beyond. Social, political, and environmental themes emerge through artists’ interpretations of the Northwest landscape, individual stories, and depictions of their communities. The artwork features traditional and contemporary media including photography, wood carving, fiber arts, painting, and even garbage. Artists from throughout the Pacific Northwest were selected for the commissions including residents of Seattle, Snohomish, Vancouver, Eastern Washington, Warm Springs, Chiloquin, Milwaukie, Portland, and more.

Officially opened Oct. 5, 2020, public events were delayed by the COVID-19 pandemic and have not been rescheduled. Due to health and safety concerns, visitors are not encouraged at this time. Find all the art and information about the artists online at raccpublicart.com.

Art Highlights from the Courthouse 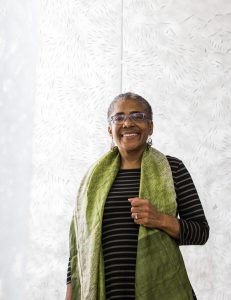 “Postcards” from Multnomah County – Exterior Panels by Barbara Earl Thomas
Seattle-based artist Barbara Earl Thomas describes her images as “postcards sent to friends.” The 33 stainless steel exterior panels crafted from her original cut paper works feature Multnomah County’s history and landscape. Thomas explains, “I think of my paper-cut images like postcards sent to friends. They mark the high points of my journey and the notable history I want to share.” Four of the original paper cuts appear on Floor 12. Read more in this Q & A with the artist.

Glass Mural by Lynn Basa – Untitled
Hanging in the light-filled entry area, Lynn Basa’s original encaustic painting was translated into a massive 25 by 75 foot mural by local glass fabricators Bullseye Studio. The studio spent three years meticulously planning and fabricating 120 individual large glass panels capturing the rich colors and texture of the original artwork. The colorful mural helps welcome visitors into the entry area’s three-story atrium. In this video, the artist describes her approach to the commission and how conversations with people impacted by the court system influenced her approach to the artwork. “Where there’s art there’s hope,” she says. “It’s a sign of life going on.” She intended the piece to represent the rippling passage of time and to “evoke feelings of hope, possibility, and transformation.”

Courthouse or Art Gallery? Floors 8-17
Visitors to the courthouse come for many reasons, experiencing a range of emotions. Recognizing that some visual images and themes can evoke strong reactions, artists selected for the project were asked to consider the circumstances of these families and individuals when creating their work. Themes chosen for the interior artworks: “Community”, “Land + Water”, “Traditional + Contemporary Craft” ensured that the art would engage visitors on different levels and deeply resonate with many people. 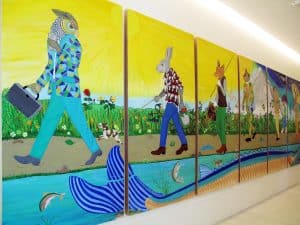 The whimsical panels of various animals dressed in colorful business and casual attire in Reflection of Nature by Baba Wagué Diákité located on Floor 15 embody his attention to the perspectives and needs of all courthouse visitors – including children. Diákité described his characters as friendly creatures who, “find common ground so that we can be at peace as one.” He depicts the sky brightening moving from the gray rain to a bursting yellow sun as the characters seemingly move through the land and seasons.

Yakama artist Toma Villa’s enormous carving was selected to reflect the curatorial theme “Traditional + Contemporary Craft.” It is created of old growth yellow cedar and titled “There Was Once a Time.” In his artist statement, he writes, “The story is of a river so abundant with fish, you could walk across on the backs of salmon.” He describes how the imagery of this story always stuck with him, despite being been passed down orally. “Although many families on the river are familiar with it, the image itself has yet to be represented physically,” he adds. Woven into the concept of the abundant fish is a story of two native brothers who must race across their backs to settle a dispute. The winner gets to take the truck into town to sell the fish while the other one stays home to fish from the platform. Although the lively Columbia River is an anachronism in the story, the bridging of two eras helps preserve and represent the history of the land and waters in the area, a theme repeated in other artworks. The 5-foot diameter carving hangs on Floor 15.

See the full collection.
Additional artworks will be purchased to rotate through the courtroom in the future. 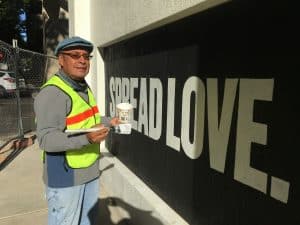 Temporary murals were unplanned additions to the building exterior. While construction wrapped up and the opening delayed due to COVID-19 restriction, local artists Rob Lewis and Amiri Rose were commissioned for a series of murals covering the original historic windows on the Jefferson Station building on the southwest corner of the courthouse block. Muralist Jose Solís  painted the temporary murals.

Multnomah County Circuit Judge Melvin Oden-Orr was preparing to move into the new County Courthouse when art began popping up around the city in response to the Black Lives Matter movement. He thought the imposing plywood walls protecting the north side of the courthouse along Southwest First Avenue represented an opportunity to break down an entirely different set of barriers by amplifying the voices of young artists.

The judge began hosting conversations in fall of 2020 with youth from organizations across the Portland metro area. Together they explored the judicial system, racism and injustice, citizens’ roles in democracy, and how to actively engage in resisting and dismantling systems of oppression. As part of these conversations, Judge Oden-Orr invited the youth to create art reflecting their feelings, experiences, and hopes for the future. The goal, Judge Oden-Orr said, was “to engage the youth of Multnomah County, celebrate the opening of the new Central Courthouse, and create a visual representation of the aspirations for the court system, from the perspective of our young people.” Judge Oden-Orr’s vision set in motion a collaboration and Solís was again contracted to transform the students’ designs into murals.

You can read more about the project and partnerships here: https://racc.org/2021/03/03/aspirations-for-justice-public-mural-created-by-multnomah-county-youth/

Artist Selection Panel
A panel of local artists, curators, community members and county staff worked together with the RACC team for several years to select, commission and purchase these artworks for the Courthouse as part of the County’s Percent for Art requirement. The requirement sets aside two percent of the construction budget of public buildings for artwork that all the community can access. From the beginning of the committee’s discussions, racial equity and sensitivity to visitors most impacted by the criminal justice system was at the forefront in terms of commissioning permanent works.

The Regional Arts & Culture Council acquires and cares for Multnomah County and the City of Portland’s publicly owned art. RACC Project Manager Peggy Kendellen managed the process of acquiring this collection for the Multnomah County Central Courthouse. She retired in 2020.