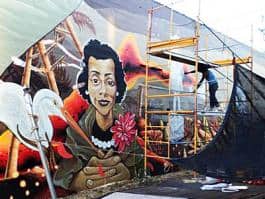 PORTLAND, ORE — On July 15, the RACC board of directors approved funding for two new Public Art Mural projects: $13,500 for seven murals in partnership with Forest for the Trees Northwest, and $14,250 for a mural in partnership with the Wattles Boys & Girls Club in SE Portland.

This year marks the third year of the Forest for the Trees Northwest (FFTT) event that brings together approximately 30 local and international artists for one week in August to paint large and small scale murals in Portland. FFTT’s goals are to improve the visual landscape of the city through quality artwork and provide opportunities to the creative community to participate in establishing Portland’s evolving visual identity. Painting will occur during the week of August 24th.  Panel discussions will be part of the 2015 event and are scheduled for September, October and November at the Pacific Northwest College of Art.  For more information, visit forestforthetreesnw.com

The Boys & Girls Club (BGCP) facility in the Lents Neighborhood will feature a 90’W x 25’H mural created in collaboration between youth from BGCP, the Immigrant and Refugee Community Organization (IRCO), as well as gang-affected youth from Latino Network and Portland Opportunities Industrialization Center, Inc. (POIC). The design  weaves the communities’ strengths into a cohesive composition and showcases the strength of our differences and interdependence. A community-wide celebration will be part of the unveiling event.

Location & artists: The mural will be on the east facing wall of the Wattle Boys & Girls Club, 9330 SE Harold with artist Rodolfo Serna as lead, assisted by Jesus Torralba.

In addition, several other RACC-funded murals have been recently completed or are still in progress:

The City of Portland’s Public Art Murals Program is administered by RACC as part of its Public Art Program. The program provides funding for murals that reflect diversity in style and media and encourages artists from diverse backgrounds and range of experience to apply. All building owners must sign an Art Easement form that will be recorded with Multnomah County. Murals approved through this program become part of the City’s public art collection for as long as an Art Easement remains in effect. Visit racc.org/murals or racc.org/public-art/mural-program.