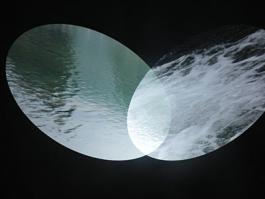 from here to there, a video installation by artist Andy Behrle, opens at the Portland Building August 24th and runs through September 18th, 2015.

PORTLAND, ORE – Andy Behrle’s installation, from there to here, is an arresting visual exploration of Portland’s water system. The artist has gathered and combined into a single composition, digital video footage from the origins of Portland’s drinking water in the Bull Run Watershed and the open storage reservoirs at Mount Tabor Park. In its simplest form this project celebrates the purity of the watershed and the ingenuity of the delivery system for this amazing natural resource.

The Bull Run Watershed, which provides 85% of Portland’s drinking water, is 26 miles east of downtown, but it can be considered as much a part of the city as any park, street, river, or building. With the system’s inception over 120 years ago, waterborne illnesses and disease were almost completely eradicated, and today the water continues to flow freely to quench the thirst of nearly one million Portland Water Bureau customers.

Beyond trumpeting the wonders of the water system,  from there to here is an investigation into what a place is, how location plays a part in that determination, and how two places can be so interconnected physically as to be indistinguishable when separated. In essence, the watershed is captured and displaced into thousands of miles of pipes and tubes before filling bathtubs, bottles, toilets, and everything at the end of a pipe throughout the city.

At the Installation Space, two digital projectors will shine images of water captured from the open reservoirs in Mount Tabor Park and from the Bull Run Watershed. The projected light, ultimately bound to intersect and illuminate the gallery wall in the back of the space, passes through sheer fabric scrims on its way, causing images to float in space just off of the gallery floor. A map of the watershed and the city’s water delivery infrastructure also intercepts light and overlays a shadow of the system on the moving images dancing and intersecting on the back wall.

On this journey, light has been captured, displaced, filtered, and reflected. Locations trade places,  here is illuminated with light from there, what originates from the right moves to left, while left moves to the right. The images shot on location in the watershed are transposed onto the city and the footage collected in the city is transposed onto the watershed. They are separate, but become one. They were there and are now here.

About the Artist: Andy Behrle lives and works in Zillah, Washington and has shown and lectured on his work widely in the Northwest and greater U.S.  He received his MFA in sculpture from Arizona State University, Tempe, and holds a BA in Philosophy and Religion and Studio Art from Elmira College in Elmira, New York. Behrle was the Artist-in Residence at Tulane University’s A Studio in the Woods program in 2012, and this fall will commence a residency at the Jack Straw Cultural Center in Seattle; he has also been selected to serve as the Visiting Artist for Pacific University’s Art Experiment Workshop in 2016.

Viewing Hours & Location: The Portland Building is located at 1120 SW 5th Avenue in downtown Portland and is open 8 am to 5 pm, Monday – Friday.  from there to here opens August 24th  and runs through September 18th, 2015.