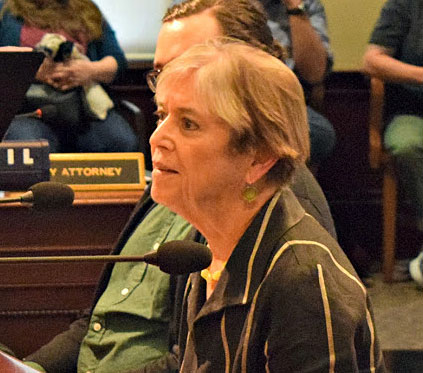 Many thanks to all who attended our annual presentation to City Council when we thank Council for their on-going support. While we also talk about how we invested the City’s allocation to RACC over the past year, we focus even more on how powerful the impacts of these dollars are to artists, arts organizations, schools, and arts enthusiasts around our region and beyond.

The Obo Addy Legacy Project opened the event on April 21st with rousing and reverberating Ghanean drumming as people entered Council Chambers. RACC’s Board Chair, Jan Robertson, and I then ran through some highlights of our programs in 2015 and we were all treated to music performed by a quintet from Bravo Youth Orchestra.

These talented Rosa Parks Elementary students are evidence of what magic can happen thanks to their music teacher paid for by the Arts Tax, and an arts organization, Bravo, providing learning experiences inside the school. Jan also described the ever growing Right Brain Initiative and how supportive our City leaders have been since day one.

I ran through images of recent public art projects including a Buster Simpson sculpture in South Waterfront and a wide array of murals funded in part by RACC’s Murals Program and Forest for the Trees, an organization that brings together local artists and others from around the world to create large scale murals around our city. The audience also saw sneak previews of upcoming public art  in the works. To see some of these images for yourselves, click here (slides 27-31).

RACC Board member and Chair of our Grants Review Committee, Susheela Jayapal, described the various ways we award City funds to artists and organizations and the challenges facing RACC and the organizations who benefit from the Arts Tax, which currently is not bringing in the full amount voted approved by Portland voters in 2012. Susheela also introduced jazz musician and PSU professor, Darrell Grant, who described what he was able to achieve thanks to a RACC Project Grant. Literary Arts Executive Director Andrew Proctor explained the phenomenal success of the inaugural year of its Wordstock Festival, newly adopted by his organization, a longtime member of RACC’s General Operating Support program. And finally Luann Algoso spoke about APANO’s Expanding Cultural Access grant, which supported their well-received Cultural Events Series in the Jade District.

RACC’s Board member Mike Golub introduced RACC’s on-going programs which beneficially connect arts and business. When Business for Culture and the Arts closed last summer, RACC was asked to take on two of the organization’s most successful programs. Art of Leadership under George Thorn’s leadership provides seminars to train business people to be Board members of nonprofit arts organizations. RACC now also hosts The Arts Breakfast of Champions, which recognizes top donors and champions of the arts. We hope to expand the event’s scope going forward to celebrate all the ways arts and business can partner to inspire employees and foster creative collaborations.

Mike Co-Chair’s Work for Art, our workplace giving program, which typically raises about $750k a year for arts organizations. In this 10th anniversary year RACC hopes to raise a $1 million, through workplace campaigns and events such as the upcoming Battle of the Bands, May 12th. Part of ZGF’s competing band, Pencil Skirt Paula and the Straightedge Rulers, treated the audience to a musical tribute to Prince.  Finally Ian Mouser of My Voice Music testified about the amazing work his organization can do for kids with City funding, and the grand finale was a moving duet sung by Matthew Gailey and Lea Mulligan of PHAME (below). We so value and appreciate everyone’s time and enthusiasm and the long-standing and heartfelt commitment by our supportive City Council!