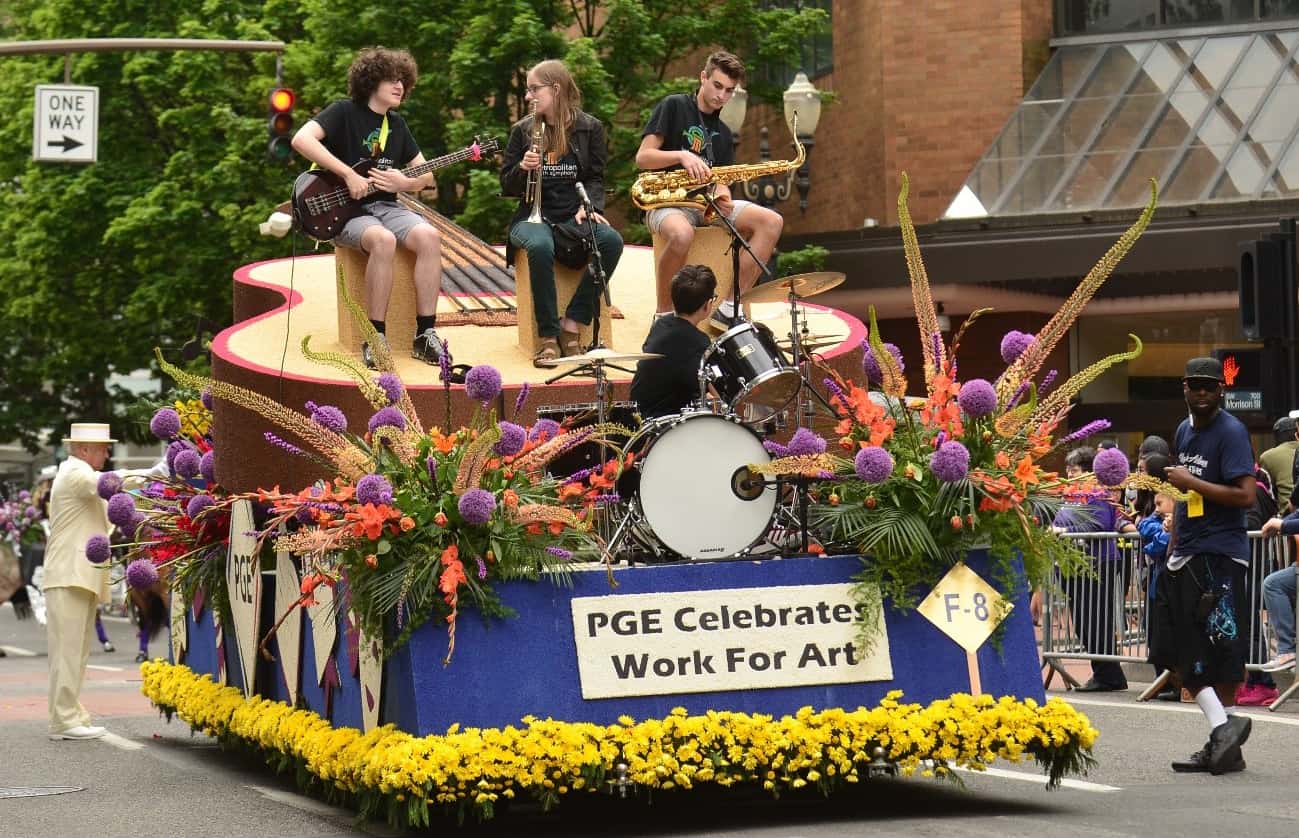 The PGE Float celebrating Work for Art during the Grand Floral Parade on June 11, 2016. The float claimed the Rose Festival Court Award for “best example of enthusiasm and teamwork.” (Photo by Vern Uyetake)

On June 30, RACC concluded its tenth annual Work for Art campaign. And while it will take a few more weeks to count and confirm all of this year’s campaign contributions, one thing is certain: the 2015-16 fundraising drive will break all records for participation and revenue.

Ten years ago Work for Art burst onto the scene raising $447,000, but this year organizers expect to clear more than $900,000, with all proceeds benefiting local arts and culture organizations. Workplace giving campaigns remain the program’s largest source of revenue, with more than 2,000 individuals in 75 companies participating this year. In addition, 30 individuals stepped up with leadership contributions of $1,000 more, and Work for Art’s first annual Battle of the Bands competition added $70,000 to the campaign total in May.

Work for Art has also enjoyed significant exposure during its tenth anniversary, including a generous contribution from Portland General Electric. If you attended the Rose Festival Starlight Parade or Grand Floral Parade this year, you may have seen – and heard – the PGE float saluting Work for Art. Musicians from Metropolitan Youth Symphony (one of Work for Art’s 100 funded arts and culture groups) jammed out atop a colorful larger-than-life guitar. PGE employees have been the top donors to Work for Art for four years running.

The 2015-16 campaign total and top companies will be announced at a special event on August 4. Local arts and business leaders will celebrate outgoing campaign chairs, Mike Golub and Dave Lofland, and applaud Work for Art’s program manager, Kathryn Jackson, who departs this month after 10 years with the organization. Over the last 10 years, Work for Art has raised more than $7.1 million for local nonprofit arts organizations.

The 2016-17 campaign will be chaired by Kregg Arntson, Director of Corporate Social Responsibility for Portland General Electric and the Executive Director of the PGE Foundation.