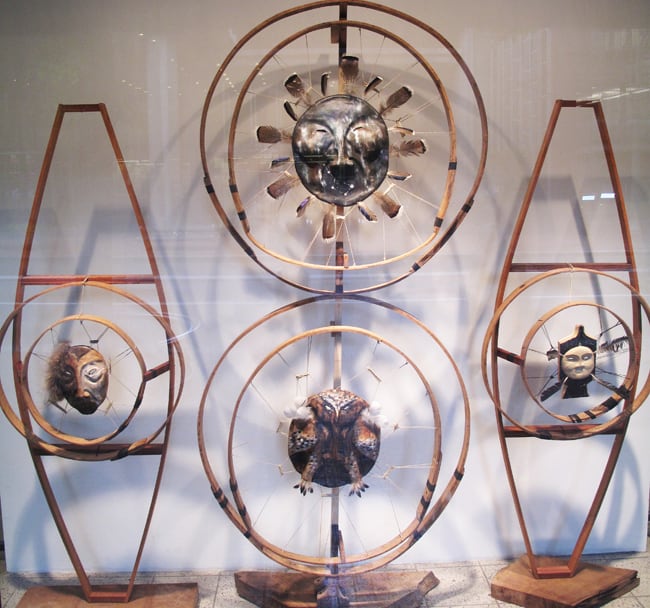 From the Here to There and There to Here installation by two Alaska Native artists Terresa White (Yup’ik) and Sean Gallagher (Inupiat). On exhibit at Portland City Hall from 11/11-12/7.

“Where ever you are, Indians have been.” Jeremy FiveCrows (Nez Perce) used these words from Portland street graffiti to open his remarks at City Hall on October 12, Indigenous Peoples Day.

Indeed, where ever you are in the metro area, it’s the Chinook peoples who have already stepped there.

This is important, because, as Roger Fernandes (Lower Elwha S’Klallam) observed at the RACC-sponsored Northwest Native American Storytelling Festival last month, “The native people of this place have the most to say about this locale and the human relationship with it.”

November is national Native American Heritage Month  and an apt time for us to celebrate the ongoing legacy of the original Chinook inhabitants and other native peoples whose contributions enrich this, our shared home.

November is also Public Art Month in Portland. The happy synergy between public art and Native American art is apparent in the work of native artist Lillian Pitt .. Some of her most recent public art is her contribution to the Vancouver Land Bridge, a part of the Confluence Project.

Pitt’s Welcome Gate graces the entrance to the Vancouver Land Bridge. In the City of Vancouver, Washington, the Land Bridge reconnects Fort Vancouver and the Columbia River and honors the Chinook peoples who, as Pitt says, were awesome traders. Lillian Pitt is Warm Springs, Yakama, and Wasco (a Chinookan people).

Her current project, with RACC and Portland Parks and Recreation, under the leadership of the Native American Community Advisory Council, is River Guardian, a sculpture fabricated from recycled and found materials. The piece is planned for the public walkway along the Willamette River in the South Waterfront and is intended to “help us dream and envision a future in harmony with nature,” according to Pitt and her co-creators, Mikkel and Saralyn Hilde.

Pitt is a prolific artist whose other public work can be seen at the Oregon Convention Center, the North Portland Interstate MAX station and the nearby Ainsworth Greenspace Project and PSU’s Native American Center. While these works, often collaborative projects with other usually native artists, draw on traditions of the Northwest and Columbia River, they are also inspired by legendary images from different tribal traditions and celebrate diversity of native peoples and voices in our region.

Going up in City Hall on November 11 is work by two Alaska Native artists Terresa White (Yup’ik) and Sean Gallagher (Inupiat). The installation Here To There And There To Here is part of RACC’s “Celebration of Public Art in Portland: 35th Anniversary of the Percent for Art Program.”

Their contemporary renderings of Yup’ik and Inupiat mask traditions evoke the back-and-forth connections between the human, animal and spirit worlds, according to the artists. “The qayaq (kayak) design in this installation is a symbolic lifeboat buoying us, the artists, through the calm and storms of time, life and space,” they wrote.

Living and creating here in the region, White and Gallagher like so many other native artists are part of the American Indian and Alaska Native diaspora, taking native peoples to urban areas such as Portland. The work of White and Gallagher can be seen through December 7.

Among the recent American Indian and Alaska Native artists and cultural practitioners supported by RACC is the Neerchokikoo Honoring Powwow.  For the past two years, the Native American Youth and Family Center (NAYA) has put on this annual extravaganza of artistic expression with the help of RACC.

The powwow honors Neerchokikoo, a village of the Multnomah Chinook people that, until well into the 20th century, stood on the land where the NAYA center is located. When the now 40-year old NAYA began a plan to move to this site in 2006, its leaders officially asked the Chinook community for permission to make its new headquarters on Chinook homeland.

In the mainstream American art world, the native oral tradition of storytelling might be called performance art. Native storytelling—as was recently demonstrated at the Northwest Indian Storytelling Festival—is performance, often theatric, and layered with meaning and purpose, but most of time it’s also embellished with humor.

This delightful RACC-supported event is affiliated with the Portland-based Wisdom of the Elders. Catch a final 2015 Northwest Indian Storytelling  event on November 20, 11741 SE Foster Rd., 7:00-9:30 p.m. in East Portland.

What other cultural or artist events or venues might a resident, or visitor for that matter, take in during Native American Heritage Month? Here are a few additional suggestions.

If there are any tickets left you might attend the NAYA Gala. Held at the Portland Art Museum, it’s a gathering of local Native American movers and shakers and features Native American cuisine and an art auction. NAYA bills the November 13 event as Oregon’s largest celebration of Native American Heritage Month.

For a more casual venue, take a walk to look at the mural in downtown Portland, 225 SW 6th Ave. This RACC-supported public work of art by Spencer Keeton Cunningham (Colville) and Jaque Fragua (Jemez Pueblo) is a 2005 addition to the cityscape.

Over the years RACC has sponsored and purchased more than 100 pieces of native works of art, many of them displayed outdoors and in public buildings. The next time you’re in a public space, check for native art. And enjoy a month-long exploration of native culture and art.