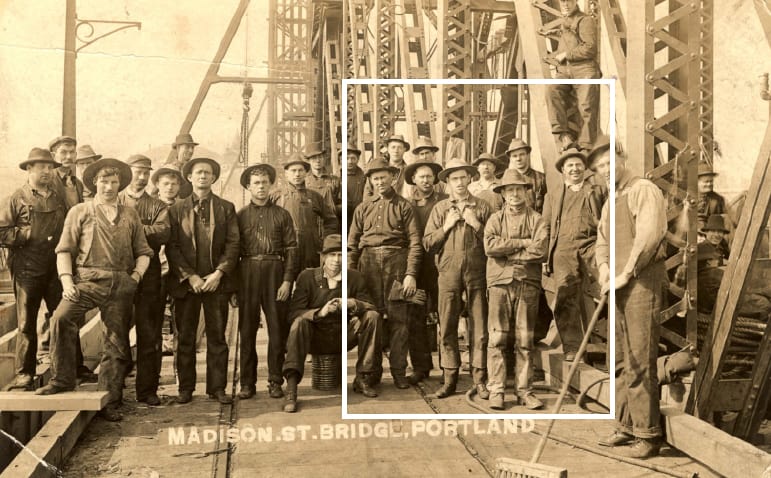 A Portland Archives photo of the Hawthorne Bridge work crew in 1910 is the source material Benz & Chang draw upon for their installation at the Portland Building.

The artists known as Benz and Chang will present a site-specific installation in the Portland Building lobby starting September 19th. The project, titled The Bridge, 1910, is a visual homage to the work crews that built the Hawthorne Bridge, Portland’s oldest existing river crossing.

Inspired by a historical photo Benz discovered in the City of Portland Archives, the installation recreates a bridge work crew scene through a series of four large paper screens hung in the exhibition space. Each individual screen contains a hand-cut silhouette which offers a layer of visual information. Viewed together, the silhouettes complete and frame the scene into a recognizable archetypal representation of the building of a bridge. By adjusting position in front of or alongside the silhouettes, viewers can alter their angle of view and manipulate the degree of abstraction or representation they take in.

The Portland Building is located at 1120 SW 5th Avenue in downtown Portland. The exhibition is free and open to the public from 8 am to 5 pm, Monday – Friday. For more information on the Portland Building Installation Space series, including images, proposals, and statements for all projects dating back to 1994, visit http://racc.org/installationspace.