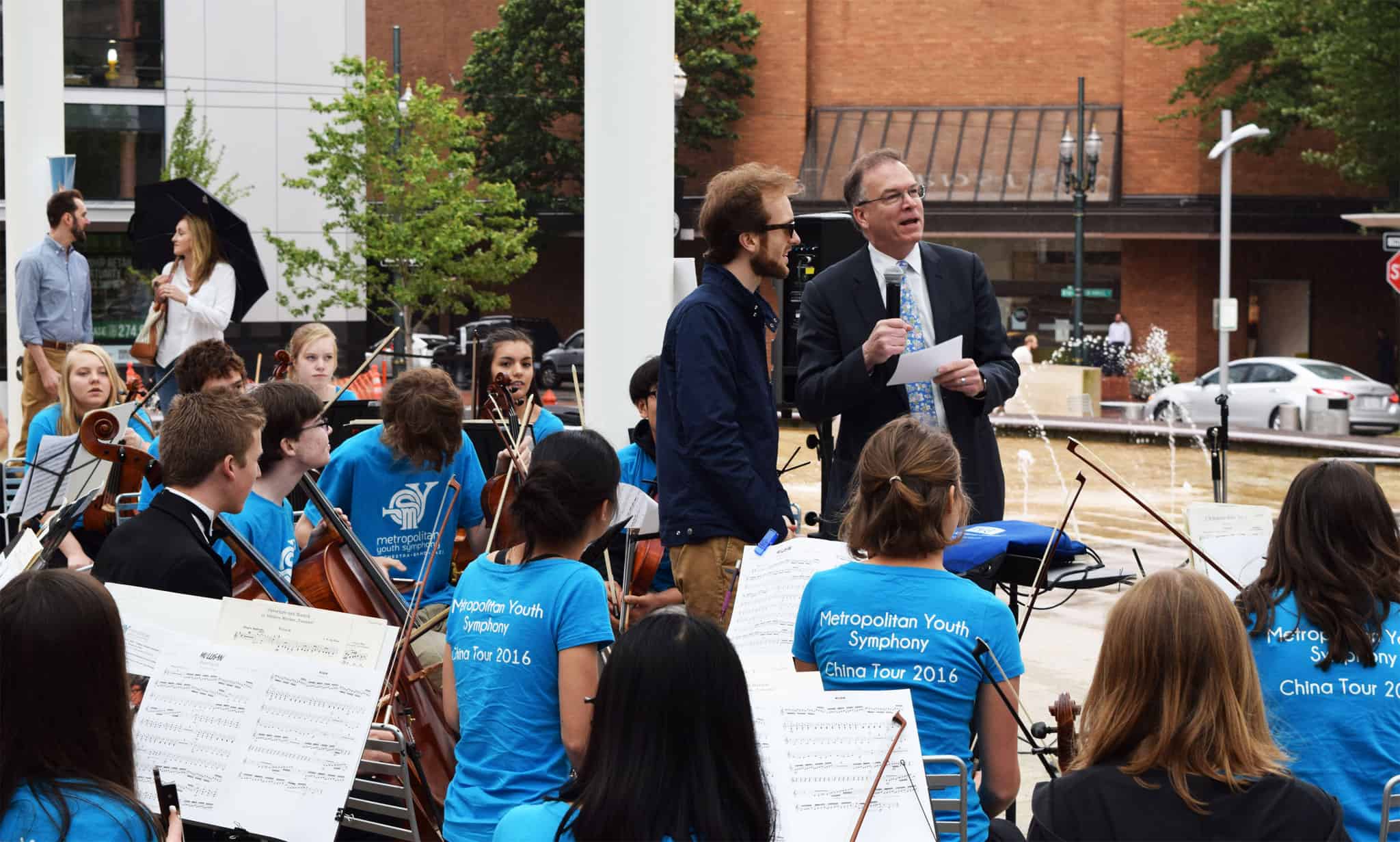 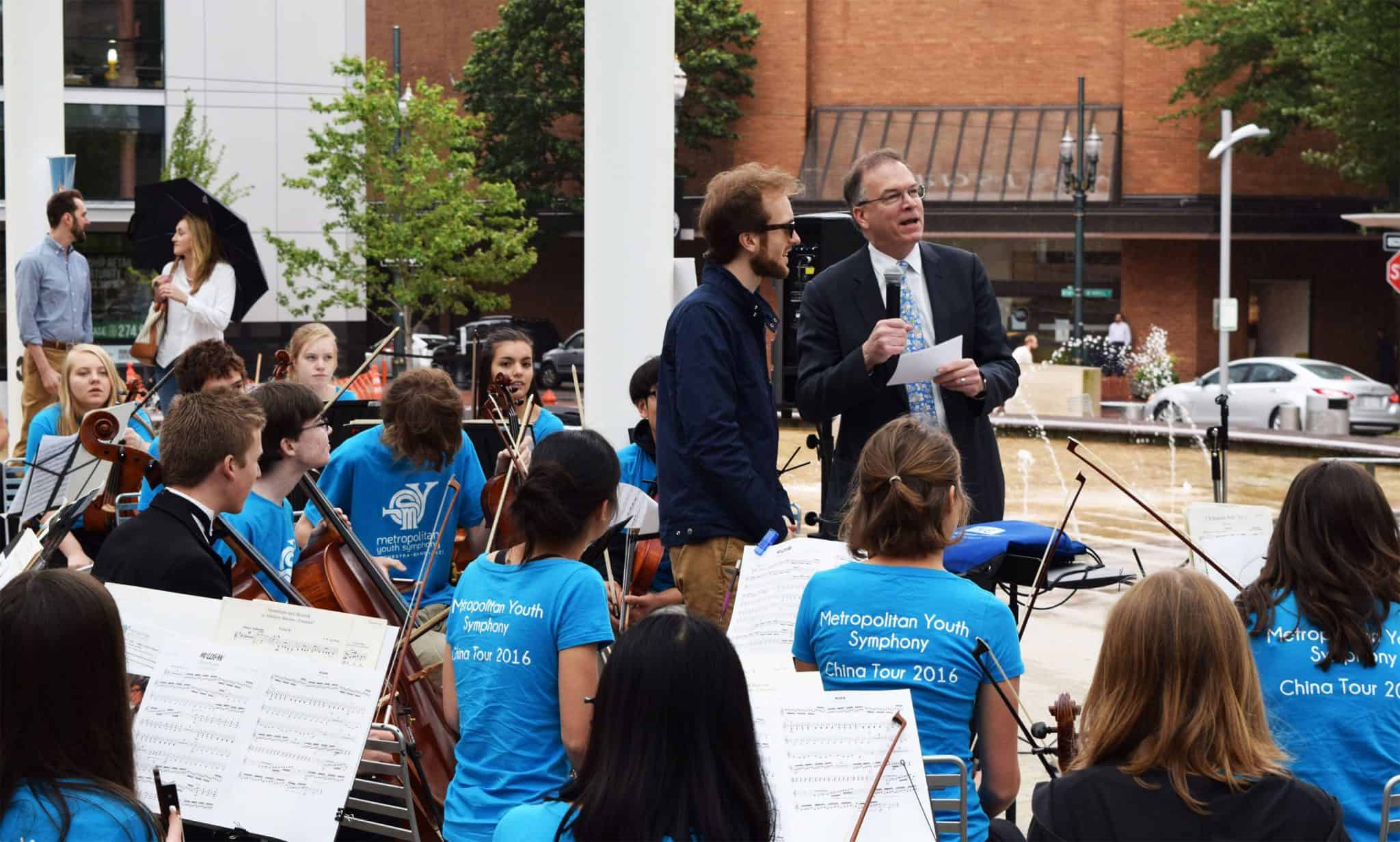 Commissioner Nick Fish at a the Metropolitan Youth Symphony concert in downtown Portland.

Imagine Portland with no art. No paintings or murals. No Lee Kelly sculptures. No Grimm or Wild or Live Wire. No Jefferson Dancers, symphony and opera in our parks, or production of Our Town. No Mel Brown Quartet. Would you still choose to live here?

Fortunately, art, culture and heritage are woven into the fabric of our city. And this year, we have much to celebrate: a proud history of public and private support for the arts; strong leadership from organizations like the Regional Arts & Culture Council and the Oregon Arts Commission; and an Arts Tax delivering on its promise of enriching the lives of 36,000 elementary school children in six local school districts.

And these issues rose to the top during the Mayor’s race this spring. At a forum on arts and culture, the candidates displayed an impressive depth of knowledge. In the end, Portland elected a new Mayor, Ted Wheeler, deeply committed to arts and culture.

As 2016 comes to a close, we also face many challenges.

Portland is fast becoming unaffordable for artists and non-profit arts organizations. We continue to struggle with translating equity into action. And will a new Republican administration in Washington continue to support public funding for the arts?

Here is my (highly selective) report on the State of the Arts.

In April, RACC presented its annual “State of the Arts” to the Council. The sounds of Portland Opera and youth singers from the BRAVO Orchestra and Rosa Parks Elementary reverberated through our chambers.

The City of Portland continued to prioritize funding for the arts. This year we contributed $7 million to RACC, about 70% of its $9.7 million budget. If we are to grow the pie, however, our partners also need to step up to support this regional effort.

Under Mike Golub’s leadership, Work for Art, a workplace giving campaign, hit $912,000 this year. I signed up, and not only enjoy the convenience of automatic deductions from my paycheck, but also the added benefit of the Arts Card!

And RACC is fully engaged in the important work of expanding access to the arts and building equity into all of its grant-making. Small community-based arts organizations deserve our support.

Our vision for the arts extends beyond the region. I once served as vice-chair of the Oregon Cultural Trust. The Trust allows individuals and businesses to support art, culture and heritage statewide, for which they get a tax credit on their state tax return.

Federal Funding for the Arts

This past year, America celebrated the 50th anniversary of the National Endowment for the Arts (NEA). At the bill signing ceremony on September 29, 1965, President Johnson declared that “[a]rt is the nation’s most precious heritage…it is in our works of art that we reveal ourselves, and to others, the inner vision which guides us as a Nation.”

Stirring words. But today, federal funding for the arts and the humanities is very modest, and vulnerable to more cuts. Will President-elect Trump defend the NEA, or will we see a repeat of 1995, when its budget and staff were slashed by fifty-percent?

The Arts Tax Delivers for Kids

The voter-approved Arts Tax had a good year. Collections were up significantly, and revenues will exceed $10 million dollars.

That means 36,000 elementary school kids benefited from arts instruction in school. We know from the Right Brain Initiative that arts education improves student achievement across the board.

The Arts Tax has prevailed in three legal challenges. Now the Oregon Supreme Court has agreed to hear a final appeal. The hearing, which is open to the public, will be held at Lewis and Clark College on March 6th, 2017. We continue to believe the tax is constitutional.

Stan Penkin completed four years of service as the chair of the Arts Oversight Committee. He has been a tireless and passionate supporter of the arts, and we owe him a big debt of gratitude.

The Housing Crisis and Artists

Artists and arts organizations are also feeling the squeeze. The eviction of artists from studio spaces in Towne Storage was the proverbial canary in the tunnel. If we do not act quickly, we risk losing something that can’t be replaced.

I believe it is time to convene a panel of stakeholders, including artists, public-spirited developers, the Portland Development Commission, and RACC to identify solutions.  We should look at best practices in other cities, including incentives, zoning changes, and cutting red tape.

This year, arts and culture once again enriched my life. Here are some of my personal highlights:

I had a cameo role in Artist Repertory Theater’s production of The Skin of our Teeth; was interviewed by Jessica Rand of KMHD Jazz radio about my first encounter with Oscar Peterson, and by OPB’s State of Wonder about the shortage of affordable artist studios; and participated in a City Club forum on the arts at Milagro Theatre.

Sculptor Lee Kelly was named an “Honored Citizen” by the Architecture Foundation of Oregon.  And my friends Walter Jaffe and Paul King at White Bird presented me with their “Angel Award,” a singular honor.

Finally, I visited Crow’s Shadow Institute of the Arts in Pendleton, Oregon. The collection of prints, made by prominent Native-American artists, is breathtaking.  I met one of the founders, James Lavadour, whose paintings and prints celebrate the natural landscape of Eastern Oregon.

In 2017, we must continue to build on our success. Complacency is not an option.

Here are some of my priorities for the next year:

For the past three years, I have had the honor of serving as the Arts Commissioner for the City of Portland—following in the footsteps of past champions like Sam Adams and Mike Lindberg.

I have learned that our success depends on vision, leadership and strong partnerships.

Thanks to the artists, teachers, and nonprofit arts and culture organizations that call Portland home.

Thanks to the cast and crew of Grimm—for filming over 100 episodes in Portland, and for giving back to the community through the Grimm Gala.

Thanks to Jimmy Maks, for twenty years of featuring the city’s best jazz players.

Finally, thanks to my Council colleagues, our partners throughout the state, and the taxpayers who share our vision.

Portland is a special place because of your collective good work.