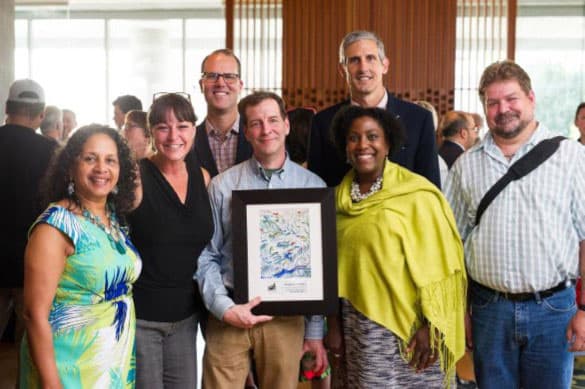 For the fifth straight year, PGE and its employees raised the most money for Work for Art. (Photo by Erica Ann Photography & Fine Art)

Work for Art, RACC’s annual fundraising campaign for local arts organizations, has released its 2015-16 report of accomplishments and financial summaries.

The report acknowledges more than 1,800 donors and 75 companies who contributed to the program’s most successful campaign yet. A record $912,213 was raised from employee and individual giving, company match, local governments, and special events – including Work for Art’s first annual Battle of the Bands.

In August, RACC and Work for Art recognized the top workplace giving campaigns, and celebrated outgoing co-chairs Mike Golub, president of business at the Portland Timbers, and former regional president of KeyBank, Dave Lofland, for their leadership during the 10th anniversary.

The full report can be viewed online: workforart.org/annual-report-2016.