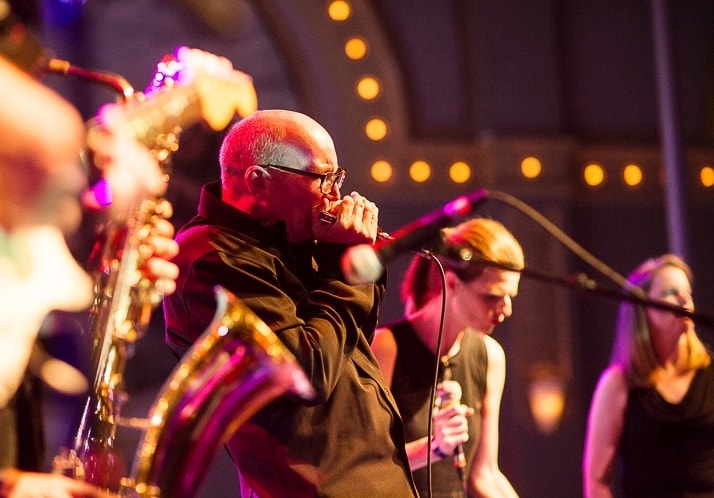 Pencil Skirt Paula and The Straight Edge Rulers, from ZGF Architects, won the Best Company Band at the 2016 Battle of the Bands. (Photo by Erica Ann Photography)

The Regional Arts & Culture Council (RACC) is now accepting registrations for its second annual Battle of the Bands competition slated for Wednesday, May 17, 2017 at the Crystal Ballroom. Eight employee bands, sponsored by their companies, will perform in front of friends, family, co-workers and a panel of celebrity judges as they vie for the title of Best Company Band and other prizes. The event will raise more than $80,000 for RACC’s annual Work for Art campaign.

The debut of Battle of the Bands last year was an unqualified success, attracting seven employee bands, 400 music fans and $70,000 for the cause. Top honors went to Pencil Skirt Paula and The Straight Edge Rulers from ZGF Architects (Best Company Band); Members Only from Kaiser Permanente (Best Showmanship); and Smoke Before Fire from The Standard (Audience Favorite).

While those companies prepare to defend their titles in 2017, five spots remain for the 2017 Battle. Among the rules:

Work for Art, now in its 11th year, is an annual campaign to raise money and awareness for local arts and culture organizations, primarily through workplace giving and other partnerships with local businesses. The 2017 campaign is led by Kregg Arntson, executive director of the PGE Foundation and director of Corporate Social Responsibility at Portland General Electric. More than 70 companies will participate in this year’s Work for Art campaign, and all proceeds from Work for Art and Battle of the Bands will be granted to approximately 100 nonprofit arts and culture organizations in Clackamas, Multnomah and Washington Counties.

Portland City Commissioner Chloe Eudaly and ZGF Principal Sharron van der Meulen are co-chairing the 2017 Battle. Tickets are on sale now for $12 each at The Crystal Ballroom box office, 1332 West Burnside Street in Portland; by phone at 1-855-CAS-TIXX; or online at https://tinyurl.com/jy6pjyg. A limited number of VIP tickets are available for $100 each, including complimentary food and beverage plus reserved seating.