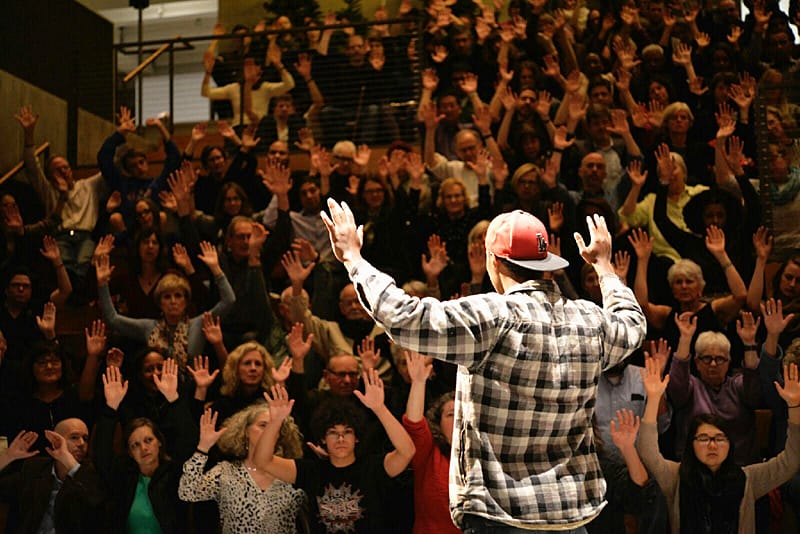 Five thousand Portlanders have seen "Hands Up" in the past year.

Is it possible you missed Hands Up in 2016?  If so, you missed a powerful and relevant production and post show conversations that moved Portland’s discussions about diversity to a whole new level. Five thousand Portlanders, both traditional and non-traditional theatre-goers, saw Hands Up in theatres, community centers, schools and colleges.  Hands Up is a presentation of the August Wilson Red Door Project, whose mission is to change the racial ecology of Portland through the arts. Kevin Jones, CEO and Founder of the Red Door Project

Directed by Kevin Jones, CEO and Founder of the Red Door, and a critically acclaimed actor and director, Hands Up is a set of seven monologues originally commissioned by The New Black Fest in New York City. The curator at New Black Fest asked seven accomplished playwrights: “What do the police shootings of Mike Brown in Ferguson, Missouri, John Crawford III in Beavercreek, Ohio, and others bring up for you?”  The result is seven autobiographical monologues crafted together to take the audience on a provocative journey of self-discovery.

Jones said he wanted to bring Hands Up to Portland because of the artistic quality of the piece and because it aligns so well with the Red Door mission. “Portland has a healthy natural environment,” he said, “but it has a lot of work to do to create a healthier racial or social environment, a city where everyone can thrive.”

When Hands Up first opened, it played to about 50 people, but it didn’t take long before audiences reached 300.  Those audiences were diverse in terms of race, ethnicity, age and class — an uncommon mix for Portland and a demonstration of changing the social ecology by “mixing it up” for shared experiences.

The philanthropic community responded to the success and potential of Hands Up and the model that keeps performances at no cost to individual audience members.  RACC, Multnomah County, The Collins Foundation, Meyer Memorial Trust, Oregon Community Foundation and the James F. and Marion L. Miller Foundation all have contributed to Hands Up.

Hands Up has had a major impact on audiences and local organizations. Director Jones thinks this impact is possible in theatre in a way that is not available in traditional diversity, equity and inclusion trainings, even ones that are designed to be interactive, because the artistic experience permeates audience consciousness.  “As a diversity consultant and theatre professional for over thirty years, I can tell you that theatre is a much stronger and more effective way to have impact,” he said. Jones added that it has to do with “provocation,” the kind of provocation that happens in theatre between the actors and the audience. “Involved in theatre, in this mechanism of artistic expression, an audience can be provoked and disturbed, but it is also protected.  As audience members, we can watch someone get shot on stage and have an experience of that shooting and we can accept it, question it, contemplate it, learn from it—all simultaneously.”

Jones begins every performance of Hands Up by saying to the audience: “We’re not asking for your agreement.  This really is not about your opinion. We’re asking you to understand that these are the real-life experiences of thoughtful law-abiding human beings. These are their experiences over a lifetime of reacting, contemplating, avoiding, second guessing and wishing it would go away. This repetition has infiltrated the psyche of our culture, the African American culture.  So, watch it from that perspective.  Experience it from that perspective. And then let’s talk.” Then the lights go out, and an actor stands on the stage (sometimes a formal theatre; other times, a community venue) and tells you some truth.  The audience sits in the dark, and through the rite that still gives theatre much of its potency, a community emerges with a common purpose: to listen, to learn, to feel. For the next ninety minutes, the audience witnesses stories that are deeply personal, deeply painful, and told directly and intimately.

There’s a good chance that white audience members have never heard these stories first hand. The truth is that most white people don’t know how to make friends with people who are different from them. There are so many barriers:  Fear of hurting feelings. Not knowing what is “correct.”  Too busy managing everyday life to put in the time and effort at what seems like a monumental task. Afraid of acknowledging conscious and unconscious biases, a sense of superiority, a fear of the other, of being uncomfortable, of not being the good white person in the room.

People of color in the audience, especially black people, have an opportunity to reflect, to hear the invitation to heal, to embrace the parts of themselves that have been neglected because they’re focused on fighting off the external forces that are causing the trauma, and trying to understand the effect of that trauma over the course of a lifetime.  Black people also might be wondering how all this truth is going to shake out. Do white people really know what goes on?  And if they’re finding all this out now, what’s it going to be like when the lights come up?  Was it a good idea to come to this play after all?

All this is understandable and natural in our segregated city, even as it needs to change. But the power of Hands Up is that even as these thoughts, concerns and fears race through minds, the stories on the stage draw the audience in, and when the lights come up, all have survived: The black actors who once again risked all that pain to tell the truth; the people of color in the audience who have seen themselves reflected in their full humanity and have felt a collective breath of empathy coming from their fellow audience members; and the white folks who feel vulnerable and realize that this new vulnerability didn’t kill them after all. Letting in another human being with another story, a different story from their own, doesn’t detract from character or status. Empathy for another person doesn’t make us less than we are. When the production is over, Red Door Founders Kevin Jones and Lesli Mones ask the audience a simple question:  “Okay, how do you feel?”  Not what do you think or what is your racial analysis or what have you read on the subject?  But, simply, “How do you feel?”  And from that simple truth, said Jones, “We begin to heal. Hands Up shifts the conversations that can be had in communities because the truth of the play and the immediacy of its portrayal have created a kind of intimacy among people who were strangers ninety minutes before when they sat down together in the dark. Something has cracked open, and there remains a sense of empathy and the possibility of a way forward.”  Audience members agree, calling the experience “transformative” and “unforgettable” and “necessary.”

Hands Up is a different theatre model.  The Red Door offers performances at no cost to audience members.  Community partners host performances, engage their constituencies, and help to facilitate talkbacks. Partners include organizations from the nonprofit, education, private and government sectors.  Significantly, the Red Door has performed Hands Up for the Portland Police Department and engaged in deep and productive conversations revealing truths from multiple perspectives. Other partners include the NAACP, YWCA, Wieden and Kennedy, Portland State University and funders.  Kevin Jones further explains the model and how the Red Door thinks about systems change:

“If you partner with the Red Door, you’ll hear about making change from a systems theory perspective, and this theory applies to everything on our planet. Everything is a system, and all systems have boundaries. All systems protect, expand and evolve. It is the boundary that protects. The boundary maintains the mechanisms that keep the system intact.  The system maintains homeostasis with its environment.  But when things aren’t working in a system, it needs feedback so it can evolve. Feedback informs the boundary. When homeostasis is threatened, it is the boundary that is called upon to be more permeable so change can happen.  Our culture is a system, all our institutions are systems and all of us, all people, are systems.  That’s a lot of boundaries and a lot of necessary protection to keep things working.  But it’s also a lot of feedback that’s necessary to move us along, to bring necessary change.  Hands Up and the conversations that follow, conversations that don’t blame but seek to deepen understanding so the feedback can get in, enable the possibility of change for systems that are stuck. We believe this is, and has always been, an important function of art and artists.  If you’re ready to partner with us, or just curious, email us at info@reddoorproject.org”

Superiority Fantasy by Nathan James
Holes in My Identity by Nathan Yungerberg
They Shootin! Or I Ain’t Neva Scared… by Idris Goodwin
Dead of Night… The Execution of… by Nambi E. Kelley
Abortion by Nsangou Njikam
Walking Next to Michael Brown by Eric Holmes
How I Feel by Dennis Allen II

The August Wilson Red Door Project brings Hands Up back in 2017 and has announced initial performance dates in conjunction with two community partners: