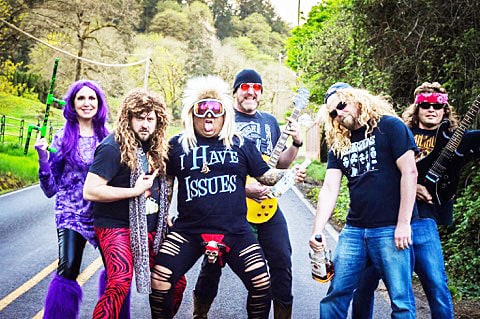 Zeek Zildjian aka David Nijhawan (third from left) posing with his "Hair Nation" bandmates from Key Bank. They are scheduled to compete with five other company bands at Battle of the Bands on May 17.

An avid supporter of Work for Art, he has channeled his passion for music into arts activism in the Portland metro area. David, Relationship Manager at KeyBank, plays a crucial role in energizing his workplace and colleagues by bringing their collective power together to advocate for the arts through the KeyBank Work for Art campaign. He is a graduate of the Art of Leadership program and a champion of The Arts Card. David has also ignited his co-workers to form the band Hair Nation in an attempt to oust rivals, Pencil Skirt Paula and The Straight Edge Rulers from their top place at Battle of the Bands.

David’s fierce creative energy comes to his music and performance through Zeek Zildjian, his dynamic alter ego and drummer for Hair Nation. Zeek was born out of David’s rock and roll roots and it all began with Van Halen.

“My first real concert was Van Halen, and it was one of the most ethereal experiences in my entire life. Hearing anthemic songs such as Jump, Panama, and I Can’t Drive 55 only took me further down the rabbit hole of the 80’s glam rock. Easily the greatest era of rock and roll, the 80’s formed my childhood and teenage years. Iconic guitar riffs, solos, and drum beats changed music forever…for the better that day,” David recounts.  (Listen to David’s interview about Battle of the Bands on Portland Radio Project.) David is bringing this magnetism of the glam rock era to the competition. He and other company bands will have an opportunity to compete and live out their rock and roll dreams. Bands from Kaiser Permanente, KeyBank, Hampton Lumber, Portland City Hall, Stoel Rives and ZGF Architects will perform before a panel of celebrity judges and 600 adoring fans to compete for the following prizes:

This year’s Battle of the Bands will be a star studded affair. Rindy Ross of Quarterflash, Edna Vasquez and Valerie Day of Nu Shooz make up the celebrity judge panel and Portland City Commissioner Chloe Eudaly and ZGF principal Sharron van der Meulen are co-chairing the event. Sarah G of WE 96.3 FM will emcee. In addition, Timbers Army Band, Greenhorn, and The Brothers Jam, featuring Jamey Hampton of BodyVox and brother David Hampton of Hampton Lumber will be performing. Timber Joey will also make a special appearance to announce the winners.

If that isn’t enough, Ben & Jerry’s PartnerShop with New Avenues for Youth, a local non-profit providing support and resources for homeless youth, will be serving up ice cream for the event.

All proceeds from Battle of the Bands competition will support over 100 art and culture organizations through Work for Art. Last year, the event raised more than $70,000. This makes Battle of the Bands a unique platform for employees to celebrate their talents and creativity while benefitting the arts and culture community. For David Nijhawan, the arts have impacted him in a profound way that has deepened his passion and commitment to the arts.

“It’s important to give to the arts community because it’s the fabric of society. Without song, dance, art, theater, and movement (among others) our world would be painfully dim. We would miss the essence of the human spirit and experience. No matter what genre or form, the arts affect and shape our live, said David. “From battle cries to rally one last stand for freedom, to an inspiring riff that spawned Eddie Van Halen’s career, to a simple groove that a future hip hop dancer wiggles to, it’s all the same; the arts are the rudiments of life.”

Come celebrate with us and support your favorite band as they battle it out for the Best Company Band.

May the best band win!

Tickets are on sale now for $12 each at The Crystal Ballroom box office, 1332 West Burnside Street in Portland; by phone at 1-855-CAS-TIXX; or online at https://tinyurl.com/jy6pjyg.