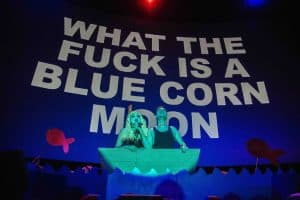 Starring Anthony Hudson – the human vessel for Portland’s premiere drag clown Carla Rossi – LOOKING FOR TIGER LILY utilizes song, dance, drag, and video to put a queer spin on the ancestral tradition of storytelling. Asking what it means for a mixed-race person to experience their heritage through white normative culture, Anthony (and Carla) draw from a songbook stretching across Disney’s “Pocahontas” to Cher’s “Half-Breed,” with musical accompaniment by Maria Choban and dance support by pin-up troupe The Dolly Pops. Anthony recounts his favorite childhood movie – the filmed production of Mary Martin’s “Peter Pan” – while seeking to understand his own racial self-identification and where he as a half-white & half-Indigenous person holds accountability and consequence. Not just autobiography, LOOKING FOR TIGER LILY is a coming-of-age story that’s more than just cowboys versus Indians.

LOOKING FOR TIGER LILY is funded in part by the Regional Arts & Culture Council and was developed in partnership with the 2016 Risk/Reward Festival of New Performance. Find out more at TheCarlaRossi.com.