Mapping and generating visualizations of Oregon LIDAR point cloud data from the Oregon Department of Geology and Mineral Industries and the National Oceanic and Atmospheric Administration, these visualizations are projected as visual loops accompanied by ambient and atmospheric soundscapes McKissack creates an environment that responds directly to the architecture its projected onto.

All works will take place at the north wall of the Regional Arts & Culture Council office at 411 NW Park Ave, Portland OR (on the corner of NW Glisan St and NW Park Ave). The remaining schedule of events for Night Lights is as follows: 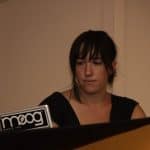 Megan Mckissack is a Portland, OR based, new media artist working in the realm of live visuals, video installation, and creative coding. Learn more about her work on her website meganmckissack.com