Portland, Ore – A new temporary public art project has been installed along the median strip on NE Holladay Street between the Oregon Convention Center and the new Hyatt Hotel and parking structure. As part of a new series called In—Between, the Regional Arts & Culture Council (RACC) invited Portland-based artist Intisar Abioto and Brooklyn-based artist Hank Willis Thomas to create ten banners, each 10 feet tall, featuring the artists’ words and images. The banners will appear on five posts along NE Holladay Street between Martin Luther King Jr. Boulevard and 1st Avenue through May 31.

Funding comes from the city’s Percent-for-Art ordinance, which sets aside 2% of the construction costs for Prosper Portland’s new parking garage to create public art. Kimberly Branam, executive director of Prosper Portland, commented, “Art teaches us about ourselves and our community, and we are proud to play a role in honoring the history and culture of the neighborhood through this work.”

RACC assembled an artist selection panel composed of community members, artists and representatives from Prosper Portland, the Oregon Convention Center, and Mayer-Reed Landscape Architecture. The panel agreed that goals for the project should include bold artwork that connects to the area’s communities and reflects the general concepts of movement, change, adaptation – addressing a general statement of “where are we going.”

With this pilot exhibition, the panel seized on an opportunity to feature both internationally acclaimed multi-disciplinary artist Hank Willis Thomas, whose first major retrospective is currently on view at the Portland Art Museum through January 12, and Portland-based artist and storyteller Intisar Abioto.  A Memphis native, Abioto moved to Portland nine years ago with her mother and sisters, and has since gained recognition for her photography and her blog, The Black Portlanders. The intention of her portrait work is to allow the complexity of people’s natures to unfold in the work.

Julia Dolan, the Minor White Curator of Photography at the Portland Art Museum, reviewed Thomas’s body of work with Abioto, who quickly gravitated to Thomas’s text-based series “I AM A MAN,” inspired by a 1968 Ernest C. Withers photograph showing a large group of protesters bearing the same message. Thomas’s series of paintings plays with the orientation and wording of the text (A Man I Am, I Be a Man, I Am Many, I Am The Man, etc.), ending with a painting that says, “I am. Amen.” Thomas states, “The greatest revelation should be that we are.”

In responding to Thomas’s work, Abioto stated that her goal was “to honor the lived history and origin of the I AM A MAN statement as expressed through the work and trials of those living through the 1968 Sanitation Worker’s Strike. It was also to illustrate with images the I AM statement as lived in and by Black people in diaspora today.” Abioto selected images from her vast archive that “communicate a deep and internally rooted sense of I AM emanating from the individuals themselves. I AM. WE ARE. These statements are timely, timeless, and true, regardless.” 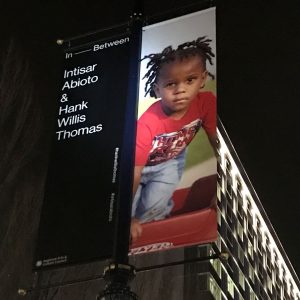 The artworks by Intisar Abioto and Hank Willis Thomas are on display along NE Holladay Street, between Martin Luther King Jr. Avenue and 1st Avenue, through May 31.

THE REGIONAL ARTS & CULTURE COUNCIL (RACC) provides grants for artists, nonprofit organizations and schools in Clackamas, Multnomah and Washington Counties; manages an internationally acclaimed public art program; raises money and awareness for the arts; convenes forums, networking events and other community gatherings; provides workshops and other forms of technical assistance for artists; and oversees a program to integrate arts and culture into the standard curriculum in public schools through The Right Brain Initiative. RACC values a diversity of artistic and cultural experiences and is working to build a community in which everyone can participate in culture, creativity and the arts. For more information visit racc.org.