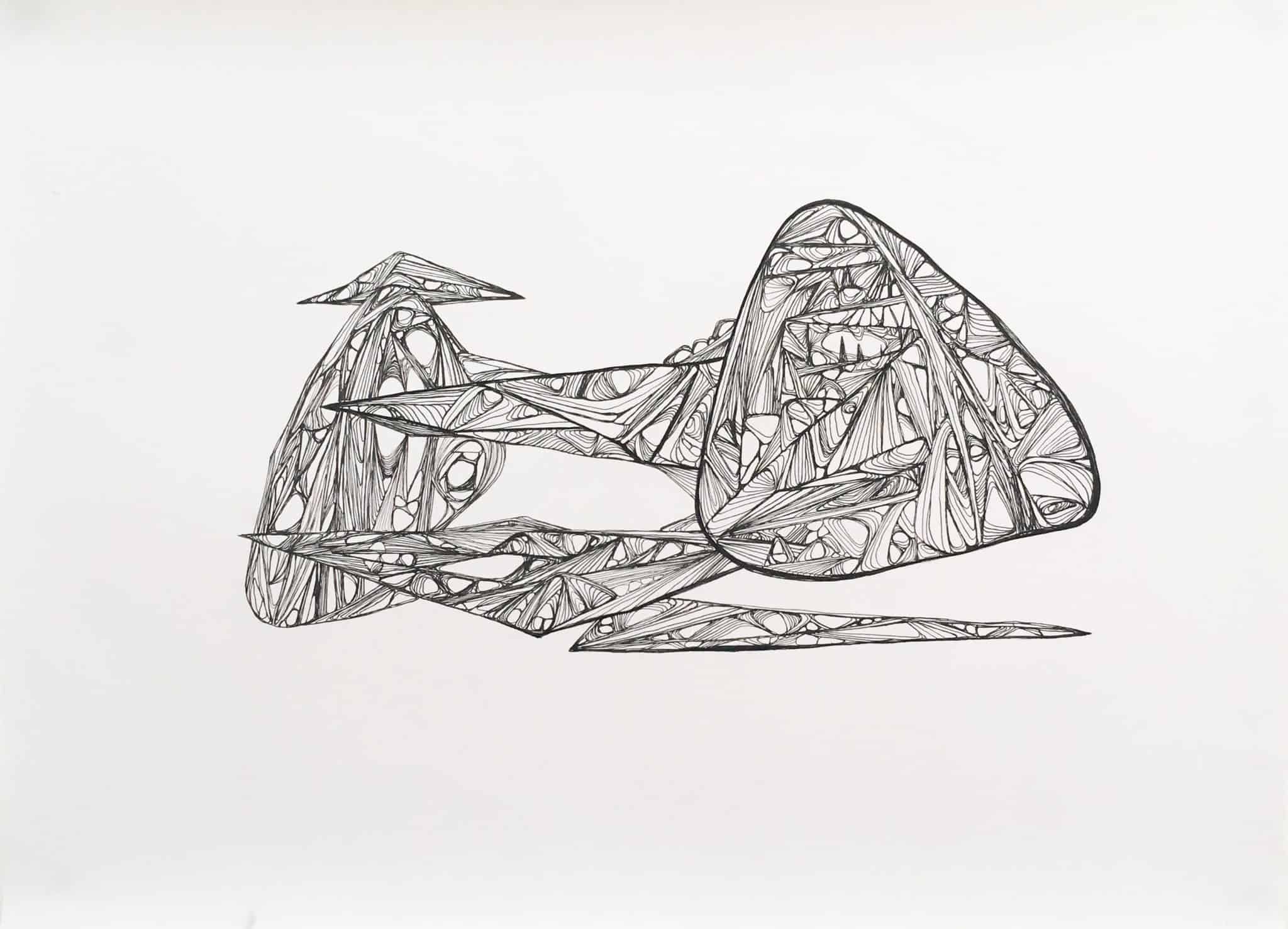 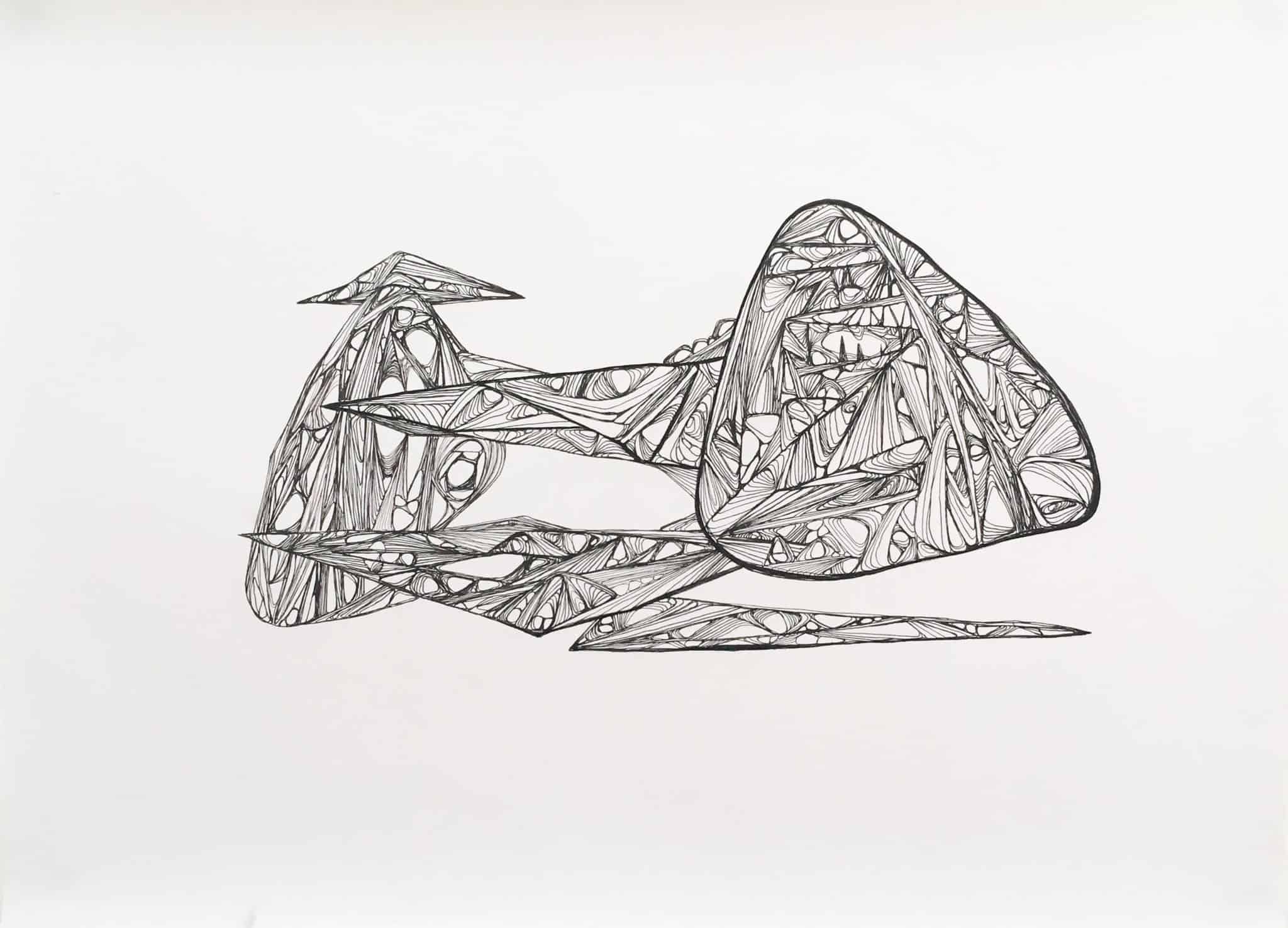 I have been drawing, painting and making prints for longer than I have done any other kind of artwork. I am a self taught visual artist. I have learned through taking classes here and there, and through working independently to develop a formal language. It has been a slow and private endeavor. The process of publicly becoming an artist was plagued by doubts, fears and contradicting inner messages. For most of my life, I couldn’t embrace an artistic identity. In a recent interview with students from Reynolds HS (available through the Art Talk Bus podcast), I shared that when I was young, I thought artists were people from another planet. Where I grew up, in the most populated and impoverished area of Mexico City, there were no artists, art centres, art activities, or anything art related. Art was something that people from a reality radically different than mine did. It took me decades (and tens of thousands of dollars in student debt!) to transform that belief. Even today, when I say “I am an artist”, the voice that speaks feels foreign to me, like it belongs to somebody else, or like it comes from somewhere far away. 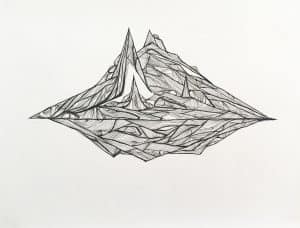 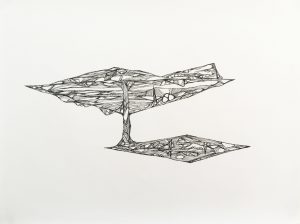 As a result of acquiring an MFA in Social Practice, most of the artwork I make available publicly, and get paid for, is interdisciplinary and process based. This kind of work is a good fit for me, because it allows me to explore issues, situations and people I am deeply interested in, to use methodologies I learned while working as an organizer and educator, and to test the impact of socially embedded art making processes. However, producing images is also an essential aspect of my artistic thinking. I have intensely missed creating images, the quietness of a studio and the dialogue with the paper and the canvas. Compared to my interdisciplinary artwork, my visual work is not as immediately recognizable as socially or politically invested, but the fact that I am doing it feels incredibly political to me. The fact that it exists, that it is created by this person that wasn’t meant to be an artist, has a political significance. 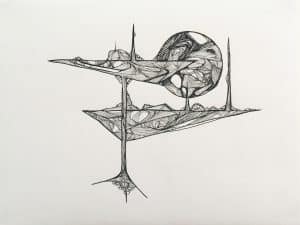 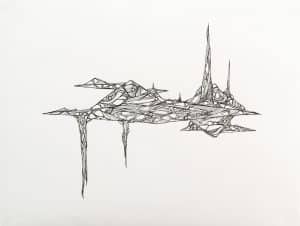 The drawings I have created over the last few months originate in countless studies, sketches and doodles of the natural world. Some of them maintain a direct resemblance to landscapes, plants, logs, stones and other natural elements. But others, while done in the same style, are less recognizable landscapes, “impossible architectures” as I have started to call them. In these drawings I combine semi-architectural structures with an organic style of drawing. These works are manifestations of ecological anxiety and visions for a future where the natural reclaims the artificial; a future where the announced ecological catastrophe is reversed and nature trumps the threat of human domination. 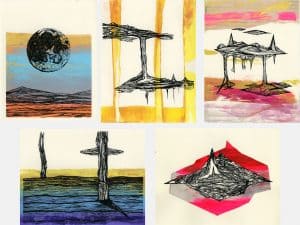 The monoprints are a combination of these drawings and an experimental use of screen printing. This is a new way of working for me. Until recently I have used screen printing in a more traditional way, creating multiples of posters, t-shirts or other materials with a functional use. I have developed an interest in the pictorial qualities of screen printing and its potential for creating textures and color surfaces that are not controlled and that are unique to each print. I am still developing a language in this new medium, and I look forward to continuing this body of work.

Patricia Vázquez Gómez works and lives between the ancient Tenochtitlán and the unceded, occupied, stolen and colonized lands of the Chinook, Clackamas, Multnomah and other Indigenous peoples. Her art practice investigates the social functions of art, the intersections between aesthetics, ethics and politics and the expansion of community based art practices. She uses a variety of media to carry out her research: painting, printmaking, video, exhibitions, music and socially engaged art projects. The purpose and methodologies of her work are deeply informed by her experiences working in the immigrant rights and other social justice movements. Her work has been shown at the Portland Art Museum, the Reece Museum, the Paragon Gallery, and the Houston Art League, but also in other spaces as apartments complexes, community based organizations and schools. She is the recipient of the 2013 Arlene Schnitzer Visual Arts Prize and has received support from the Ford Foundation, Regional Arts and Culture Council (RACC), the Portland Institute of Contemporary Art (PICA), Portland’s Jade and Midway Districts and the Oregon Community Foundation. Patricia’s work can be explored at http://cargocollective.com/patriciavg