Every year, RACC invests hundreds of thousands of dollars through Project Grants to support the creation or presentation of performances, exhibits, and other publicly accessible creative endeavors. 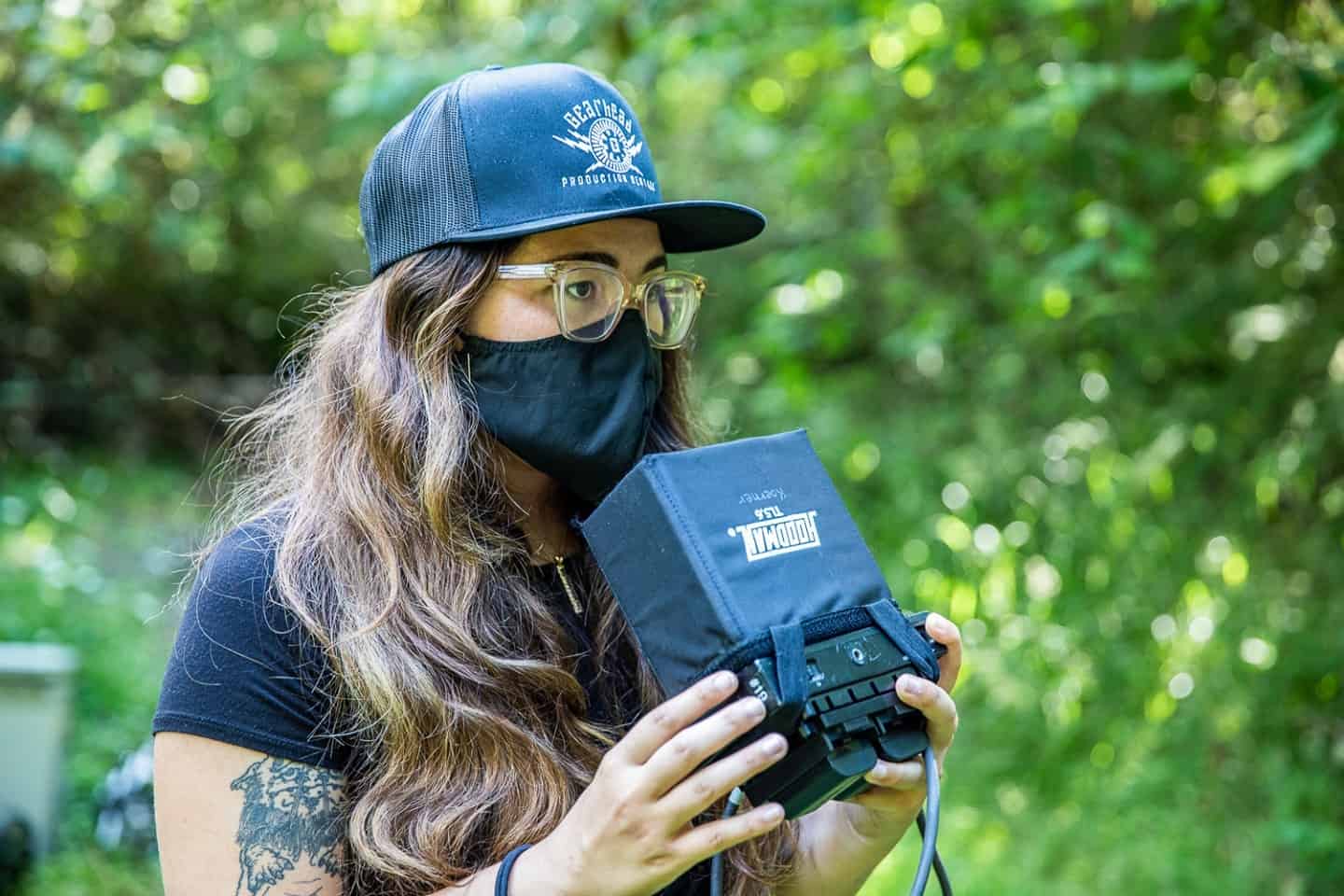 In 2019, RACC created a special category of Project Grants specifically designed for applicants who have never before received a RACC grant. The new Catalyst Grant features a shorter and simpler application, with awards fixed at $3,000 each. These grants also come with enhanced RACC staff support to help recipients with grant administration.

Last fiscal year Catalyst Grants provided 75 first-time awardees with $225,000 in funding. We’ve received feedback from Catalyst grantees that this first experience with RACC has helped them successfully apply for other RACC grants and build their grant writing skills. Additional flexibility and support during this pandemic has also been invaluable. 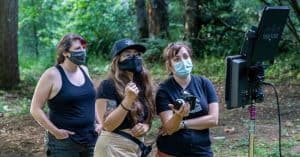 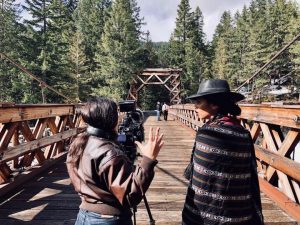 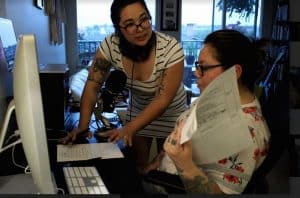 “I’m a Hapa director, filmmaker, AD, and producer here in Portland. My pronouns are she, her. Hapa is Pigeon or Hawaiian for half. I’m Japanese-Hawaiian and white. That is a big part of the work that I make in a lot of different ways. I have been living in Portland for the last year and a half. Moving to Portland was the main thing that’s driven my career forward! I lived in Seattle beforehand and felt stunted and didn’t feel connected to the community. The second my partner and I landed in Portland, I started getting jobs. I started meeting the coolest people here who were supportive and excited to work on my projects and excited to have me on to help with theirs. That’s meant a lot to me. I find it essential to bring BIPOC people onto my projects and working with women-identifying people because the set is different when you have a nice mix of everyone coming together. When I was younger and middle and high school, I took a lot of film production classes. I remember I enjoyed the classes at first but eventually got frustrated. Many girls were doing those types of courses because many of the dudes would do all my work for me. They said, ‘Oh, I’m going to help you out here — you can be in front of the camera. Well, honestly, I hate being in front of a lens! I’ve always loved period pieces, mostly old westerns, but I loathe watching them because John Wayne and all these old white cowboys are unappealing to me. But I love the imagery. I love the aesthetic of it. I love the idea of what the Old West was because it was such a diverse time. You know, we had many people of color who were building our nation up. I’m filming my own stories now. ” — filmmaker Kanani Koster.

Her Catalyst Grant supported her work reclaiming nostalgic film tropes and aesthetics for diverse audience members who’ve historically been left off-screen. She is the director of the award winning short, The New Frontier, and the docu-short, Any Oregon Sunday. 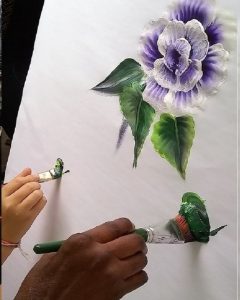 “My name is Ameera Saahir. I recently turned 74. I’m an African American woman, highly educated, I grew up in southwest Portland and was gentrified to southeast Portland; been here 16 years. I’m an artist and business owner. I was looking into my ancestry. That’s where the idea came up for the show that the Regional Arts and Culture Council funded. I’ve always captured stories and ideas. I found out from talking to family members that we have a narrative that has been circulating within our family at the family reunion. I took that information, the story, and I modeled my art exhibit after the milestones that the narrator had left for us. I took our family and I put it into historical references. Then I started looking into the story of the African migration. I’m from a large family. I saw family members becoming homeless, and I was like…oh, no. My own sister was living in terrible transitional housing; it became personal. I went backward instead of going forwards, and I traced through that story, and I looked at the housing. It started in Africa. I made some paintings of housing. There’s a slave ship called Minerva in my family history story. The woman who was captured and enslaved and brought here from Africa, well, her name was Minerva Jane. In my research, I learned—and I went, it took me months, but I traced it back—that was the name of the slave ship. That’s where our story begins. I have the narrative. I found records of the ship that carried my ancestors.” — Painter Ameera Saahir

Her Catalyst Grant supported the creation of a series of paintings called “Uninhabitable Living Conditions”. The pieces connect historical images of slave ships and sharecropping with transitional housing for African Americans. 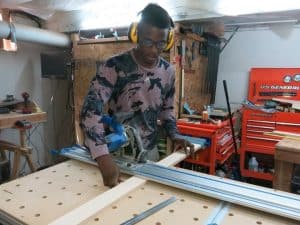 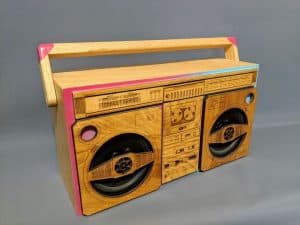 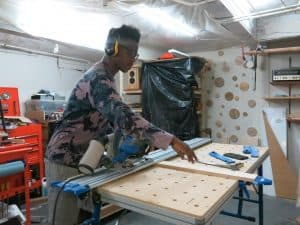 “As a kid, I was kind of an oddball nerd, and I spent a lot of time alone as an only child, even though I had pretty hardcore group of friends in my neighborhood. I always found time for myself to find things out by breaking electronics by accident and then taking them apart with a screwdriver to see what was inside. Junior High was a big one; I blew up my first speaker with too much power from an amplifier. The smell of the electronic smoking and the impact of the driver blowing out was pretty cool. I wanted to know more, and I kept with it. Yeah, I’m a huge nerd. I still keep a day job, which was heavily brought to me due to Cstm Math and my speaker building. It all turned into a portfolio. Now I’m working for a company that I’ve been with for about four years that’s in Portland. We build studio monitor speakers for professional recording studios. That takes up a lot of my time. I’ve been DJing at night and on weekends (until COVID hit). Now I’ve gotten a lot more time to focus back into things and realizing that there is no rush. The ideas are there and working on them and making them better has been a great asset to me. I’m making speakers and boomboxes. A lot of my boombox work now has been based around vector recreations of retro boomboxes, or imagination stuff that pops out. I work with plywood mostly. Laminated plywood is my favorite thing to work with, stacking the layers of Baltic birch to get a really cool edge effect. My biggest dream would be chilling somewhere, in a small manufacturing shop, making stuff.” — DJ and speaker designer Michael Davis-Yates.

His Catalyst Grant was for “Custom Mathematics”, a series of speakers he designed and hand-built from the ground up, inspired by teachings from the Nation of Islam as well as the spirit of classic vintage boomboxes.

Check out more stories about local artists, and see these ones, on RACC’s Instagram and Facebook pages.