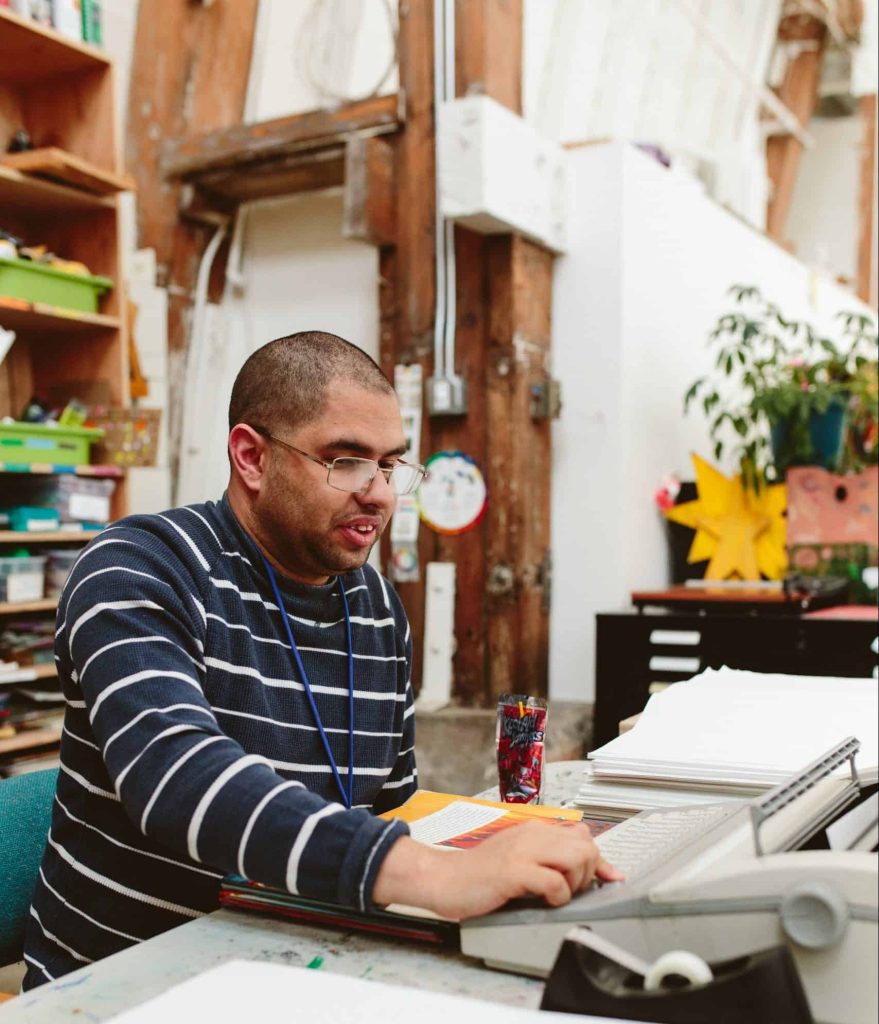 James is an entirely self-taught author and illustrator. James began drawing in high school, and was encouraged to expand his drawings with the encouragement of an early teacher. His deep creativity quickly emerged, as he transitioned away from life drawing to more fanciful subjects. It was years before he started making the books that he is now known for, and the catalyst for this shift is still unknown.

James designs and executes each book from scratch. His extraordinary process includes binding, researching, writing, and hand-drawing illustrations— many of which fold-out and can extend upwards of 275 cm. His stories weave together to form a collection inspired by his life experiences, picture books adapted from major motion pictures, and pop-culture of the late 80s and early 90s, among others.

James began by hand-writing his books with penmanship that is a work of art in itself. James’ early books alternate line for line with a slightly different shade of the same color (i.e. light blue, dark blue; pink, red). Over the past two years, James has transitioned to writing on a type-writer. His illustrations have evolved but adhere to a consistent style.

James created art at the Portland Art and Learning Studio (PALS) until it closed in 2020. During his time at PALS, James was discovered by Marshall Weber at Booklyn, Inc. in NYC who began representing him and selling his books nationally. In 2021, James joined North Pole Studio, where he works to date.

How would your community of peers (family, friends, other creatives/artists) describe you?

James is incredibly focused and has an admirable art practice, working continuously from 10am – 3pm and pausing only for a lunch break. When James is in the writing phase, his typewriter starts buzzing the moment he walks into the studio, and doesn’t stop until he leaves. It has become a beloved soundtrack of North Pole Studio.

Because of the seriousness James approaches both his art practice and the world with, many don’t know what an incredible sense of humor he has. He is a prankster at heart and has a sharp and sophisticated sense of humor which is best captured in his books.

James’ artistic genius and extensive knowledge of pop culture, familiar kids’ stories (such as Mulan, Tarzan, and the Chronicles of Narnia) is admired by his peers.

Thinking back to your artistic journey, bridging to where you are at now, how would you summarize your artwork currently? Where are you now with your work?

James continues to hone his craft; his evolution from hand-writing his books to his typewriter has marked a distinctive shift in his process. James’ illustrational style and syntax are consistent across his stories, but he continues to refine both with each book.

James experimentation with various methods and materials for binding his large-scale, multimedia books is evident over time. James books are often up to 6” thick and well over 5lbs when complete, with fold-out illustrations strategically folded to fit into a structure that can be read cover to cover.

James’ latest books are tighter, both visually and structurally with consideration to decisions around materials and paper size. Additionally, many of his recent works are written in chapters, and can be read as isolated stories or as a collection.

Based on the award/grant you received from RACC how have you continued your direction in your project/artwork/process?

In 2021, James was invited to exhibit his books in a solo booth at the Outsider Art Fair in New York City. The Outsider Art Fair is a world renown art fair, and provides a huge opportunity for lesser known self-taught artists’ work to be viewed by major art collectors alongside the greats. With the support of his team, James applied for a Make | Learn | Build grant to cover the cost of the booth fee. With RACC’s grant award, Bookyln, Inc. represented James Enos at the 2022 Outsider Art Fair in spring of 2022.

Accessing grant funding is rife with barriers for many artists in the disability community, from awareness of opportunities, through application to the disbursement processes. James’ team values RACC’s recognition of his work through this award, and their collaboration in making this grant funding accessible.

What have been some of the speed bumps you have encountered? Did it change your trajectory or direction?

For a long time, James did not have access to the resources needed to fully develop his creative practice. Being part of a progressive studio community has provided James with access to materials, direct support, and advocacy to both structure and develop his existing practice and promote visibility of the work. Having access to progressive studio programming changed everything, as it provided a platform for James’ work to be seen and acquired. Without this platform, it is unlikely that James’ work would be included in the art collections and conversations it is today.

When the pandemic hit, James’ studio program (PALS) closed, putting a temporary pause on his practice as he no longer had access to materials and space to work. In the spring of 2021, James resumed his practice at North Pole Studio.

What is next for you?

James is currently working on writing and illustrating and original series based on the Chronicles of Narnia. Both North Pole Studio and Booklyn, who represents James in NYC, will continue to facilitate opportunities for James’ work to contribute to the art and literary world. 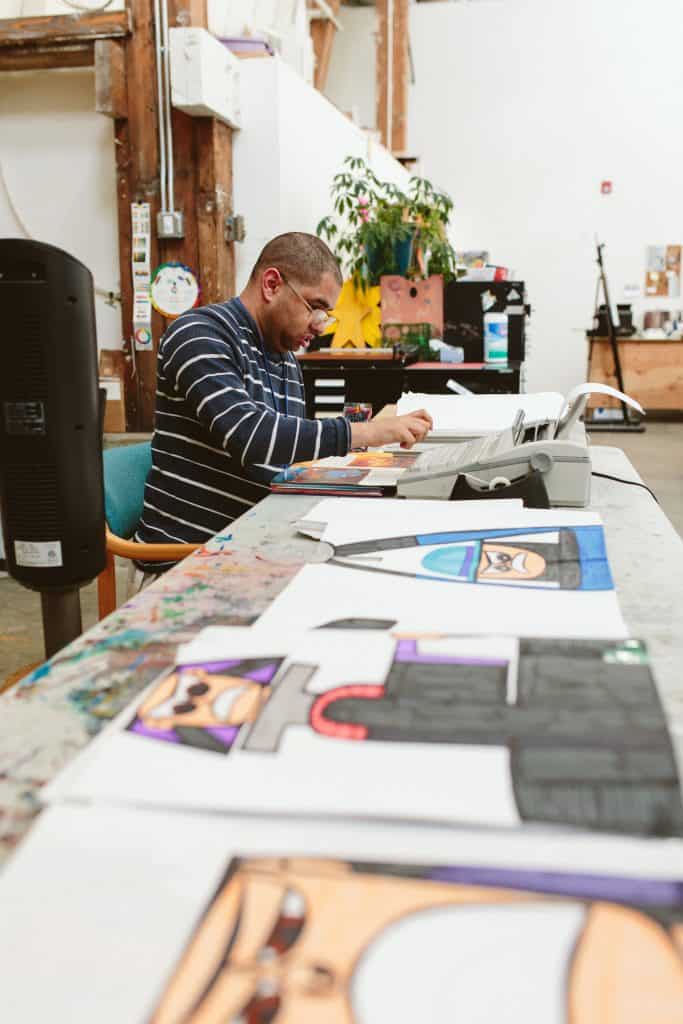 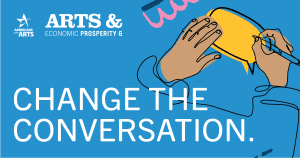 CHANGE THE CONVERSATION ABOUT THE ARTS
The arts bring us inspiration and joy, and make our community a beautiful place to live and work. But the arts do so much more.

Portland, Oregon — The Regional Arts & Culture Council (RACC) is pleased to announce its participation in Arts & Economic Prosperity 6 (AEP6), the most comprehensive economic impact study of the nonprofit arts and culture industry ever conducted in the United States. Administered by Americans for the Arts, AEP6 will examine the economic impact of the arts and culture in Multnomah County and 386 additional communities representing all 50 states and the District of Columbia.

After more than a one-year postponement, the Arts & Economic Prosperity 6 (AEP6) study is getting underway nationally this month of May 2022. This is the sixth national economic impact study of America’s nonprofit arts and cultural industry. It documents the economic contributions of the arts in diverse communities and regions across the country, representing all 50 states and the District of Columbia. Previous partners have included local arts agencies, community foundations, economic development agencies, chambers of commerce, performing arts centers, and more. And RACC is looking for your participation!

It is now more important than ever to demonstrate that, even in the wake of COVID-19 and the resulting economic recession, the arts will provide a significant boost as we recharge the economy in America’s local communities. The arts will draw people out of their homes and back into community life—spending time with each other and spending their money with local merchants. Studies indicate that audiences cannot wait to return, and we are looking to our community along with them to count us in on that.

While the arts have the potential to impact many aspects of our community, the truth is they also have a power all on their own. The arts are an open invitation to engage in our  history, our heritage, our politics, the way we learn—in short, the arts are part of our daily lives, and play a role in all aspects of the human experience. While most appreciate the cultural benefit provided to our community, few realize that our local arts industry supports jobs, generates government revenue, and is a cornerstone of tourism. Economic impact studies such as these will expand the conversation about how many people view the arts.

In the previous survey, AEP5 showed that nationally the nonprofit arts industry generated $166.3 billion in economic activity, supporting 4.6 million jobs and generating $27.5 billion in government revenue. Locally, our arts industry generated $687 million of economic activity—$364 million in spending by arts and cultural organizations and an additional $323 million in event-related expenditures by their audiences. This activity supported 22,299 full time equivalent jobs and generated $53 million in revenue to local and state governments. Our local nonprofit arts and culture organizations have been and will continue to be critical to our community and economic recovery.

We are currently seeking your help to collect this data for AEP6. While part of a national study, our reports will be based on spending by our own local nonprofit arts and culture organizations as well as the event-related spending by their audiences (at local retail, parking, and restaurant establishments). We believe this important research tool will demonstrate that when we invest our dollars in the arts, we are not doing so at the expense of economic development. Rather, we are investing in an industry that strengthens our local economy.

Learn more about the AEP6 study and how you can get involved today: AmericansForTheArts.org/AEP6 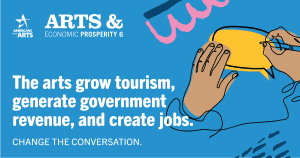 In short, the arts mean business. Help us change the conversation.

Interested in getting involved within the City of Portland or anywhere in Multnomah County, please contact Mario Mesquita, Manager of Advocacy and Engagement at RACC, AEP6@racc.org.

More local information about AEP6 can also be found and will be continually updated on our website www.racc.org/aep6/.

If you are interested in participating and reside in our sister counties please contact the the following:

THE ARTS MEAN BUSINESS IN THE GREATER PORTLAND AREA

The Arts & Economic Prosperity (AEP6) survey is back.

AEP6 documents the economic contributions of the arts in over 250 diverse communities and regions across the country, representing all 50 states and the District of Columbia. During 2015, AEP5 in Oregon the nonprofit arts and culture industry generated $687 million of economic activity—$364 million in spending by arts and cultural organizations and an additional $323 million in event-related expenditures by their audiences. This activity supported 22,299 full time equivalent jobs and generated $53 million in revenue to local and state governments.

The study put to rest a misconception that communities supported arts and culture at the expense of local economic development. In fact, what AEP5 showed was that communities were investing in an industry that supports jobs, generates government revenue, and is the cornerstone of tourism. This economic impact study sent a strong signal that when we support the arts, we not only enhance our quality of life, but we also invest in the Greater Portland Area’s economic well-being, including Clackamas and Washington Counties.

This year, we have a chance to study the impact of the past few years along with the resilience of our creative community. Nonprofit arts and culture organizations are active contributors to our business community. They are employers, producers, and consumers. They are members of the Chamber of Commerce as well as key partners in the marketing and promotion of their cities, regions, and states. Spending by nonprofit arts and cultural organizations totaled $364 million during fiscal year 2015.

To measure the impact of spending by cultural audiences in the Greater Portland Area, data were collected from 1,474 event attendees during AEP5. Researchers used an audience-intercept methodology, a standard technique in which patrons are asked to complete a short survey about their event-related spending (while they are attending the event). Event-related spending by these attendees totaled $116 million in the Greater Portland Area during fiscal year 2015, excluding the cost of event admission.

Read more about RACC’s lead in the City of Portland and Multnomah County here.

Audience surveys will be collected from attendees at performances, events, exhibits, venues, and facilities during the 12 months from May 2022 through April 2023. Venue Eligibility

If you are interested in getting involved as either a venue to be counted please submit your live event for consideration here (for the tri-county area) and/or are interested in volunteering in Multnomah County, please contact Mario Mesquita, Manager of Advocacy & Engagement at Regional Arts & Culture Council at AEP6@racc.org

Read more at Americans for the Arts.