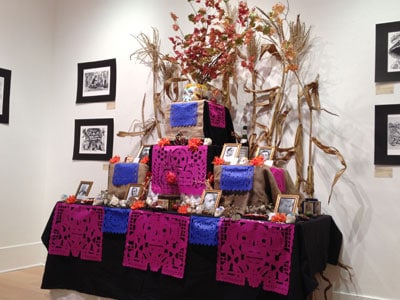 PORTLAND, ORE –  Artist Pepe Moscoso, known for his photography, collage and assemblage work, brings his talent for combining mediums to the Portland Building in October with a site-specific Día de los Muertos (Day of the Dead) installation in the lobby exhibition space.

As many already know, the Día de los Muertos holiday is focused on commemorating family and friends that have died and acknowledging the natural part death plays in the cycle of life. The holiday originated in Mexico, but has expanded over time and is now celebrated throughout the U.S. and beyond. Moscoso has worked on a regular basis with the Miracle Theatre Group on their stunning Día de los Muertos ofrendas (altars) and RACC is pleased to be able to present his work in the Portland Building.

“Day of the Dead altars are built during the “Día de los Muertos” holiday to honor the lives of those who have passed away. They are often quite beautiful creations, constructed with food offerings as well as things that the person enjoyed during their lives. It is believed that the spirits consume the essence and the aroma of the foods that are offered to them. It is a symbolic construction derived from a set of beliefs combining the pre-Hispanic ideologies, the worldview of Mesoamerican cultures, and the religious European beliefs of Abrahamic character brought by the Spanish conquistadores and missionaries.

About the Artist:  Born in León, Guanajuato, México, Pepe Moscoso lives and works in Portland. His interest in photography and collage are born of a desire to transmit and show his way of seeing the world. Pepe is the founder of FusionArte, a Portland based organization committed to promoting Latin American arts and culture. He also hosts a popular radio program on KBOO (90.7 FM in Portland) that focuses on art and culture and presents music in a variety of genres and languages. His installation at the Portland Building opens on October 20th and runs through the end of October. To see more work by Moscoso visit www.theblindinsect.com

Viewing Hours & Location: The Portland Building is located at 1120 SW 5th Avenue in down-town Portland and is open 8 am to 5 pm, Monday – Friday.