The Regional Arts & Culture Council (RACC) has teamed up with the Portland Bureau of Transportation (PBOT) to support local Black-led art projects around the city.

Along the median strip on NE Holladay Street, between the Oregon Convention Center and the Hyatt Hotel and parking structure, the temporary public art project that began in 2019, In—Between returns. Author Renée Watson has responded with poetry to the photographs of Richard Brown. Eight unique ten-foot banners displayed along the Max tracks convey Black children’s dreams of their possible futures.

Richard Brown is a photographer and a Black Portlander who has spent decades working to bridge the divide between the police and the Black community. Through his art and activism, Brown has been an advocate for Portland’s Black communities for over 40 years.

“Being an activist can often feel like walking through a dark tunnel with no end in sight. But I have learned something over the years: you can make your own light. And you’ll need to. I’ve made my own light by taking pictures.” – Richard Brown. 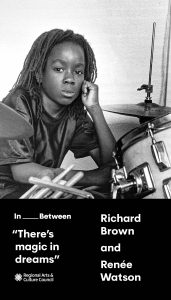 A sample of the banners that will be displayed along the Max tracks. Designed by Danielle McCoy of Amen Amen Studio.

Renée Watson is a #1 New York Times bestselling author, educator, and community activist, and her writing centers around the experiences of Black girls and women, exploring themes of home, identity, and the intersections of race, class, and gender. Many of Renée’s books are inspired by her childhood growing up in Portland.  Her book series, A Ryan Hart Story, takes place in the Northeast Portland neighborhood and the main character attends Vernon Elementary school.

The artist and author share common ground, both in their work and in their personal histories. Having grown up in Northeast Portland, Watson now calls Harlem home. Born in Harlem, Brown now calls Northeast Portland home. The students featured on the banners attended Vernon Elementary School, which Watson attended and continues to write about. This pairing of text and image, curated by and featuring the work of intergenerational Black artists and activists, asserts dreaming into becoming.

The banners will appear on four posts along NE Holladay Street between Martin Luther King Jr. Boulevard and 1st Avenue through June 30, 2023.

“I am the song of my ancestors. In me an ocean of melodies sing.” – Renée Watson

Continuing up NE Martin Luther King Jr. Boulevard, Richard Brown’s series of photographs “Keepers Of OurStory” will be on view beginning in late September on the exterior of the Walnut Park Complex at Multnomah County Northeast Health Center (5329 NE MLK Jr Blvd, Portland, Oregon). Made in 1988, these studio and environmental portraits of Black Portland elders were created to encourage the community to value the Black elders in their lives. “Keepers Of OurStory” sits alongside the 1998 mural work of celebrated Portland artist Adriene Cruz, who coincidentally was also born in Harlem.

Intisar Abioto, whose photographs were previously displayed at this same site alongside Hank Willis Thomas’s work, has curated these projects. A Memphis native, Abioto moved to Portland twelve years ago with her mother and sisters, and has since gained recognition for her photography and her blog, The Black Portlanders. Moving from the visionary and embodied root of Black girl Southern cross-temporal, cross-modal storytelling ways, her works refer to the living breath/breadth of people of African descent against the expanse of their storied, geographic, and imaginative landscapes.

Another Black-led Public Art project in Northeast Portland is from artist Sharita Towne. Named Black Reverie, the project is a collaborative project to create publicly accessible, exterior site-based activations that act as artistic expressions of love for Black Portland in neighborhoods of significance. One component of the project consisted of Sharita working with a variety of collaborators to create screen-based activations focusing on Black Portlanders telling their migration stories through the use of video excerpts, soundscapes, projection mapping, programmed LED lights as well as a refurbished telephone interactively capturing stories. This occurred on Juneteenth in 2021. In the fall of 2021, the second aspect of the project was completed which resulted in a mural that includes LED lights and installed lettering of the words “still here”.